Questioning the status quo has been an underlying adage of the Mark III Construction, Inc. (Mark III) team since its earliest days with just a handful of employees to today with more than 300 employees and revenues above $65 million.

From its latest investment in a leading-edge MEP (mechanical, electrical and plumbing) manufacturing facility to its innovative solutions across industrial, commercial, health care, education and food-grade markets, this family-owned, multitrade “super subcontractor” headquartered in Sacramento, California, is leading the evolution of construction.

“At Mark III, we are committed to moving the needle in our industry. Our team and shared vision to expose the world to a new way to build is the force behind the needle that will change the way projects are delivered,” says Dan Carlton, President of Mark III.

It’s a philosophy that began with the founding of the company.

Mark III began as an electrical contractor in 1976. Named after its original three investors—Mark O’Brien, Charlie Massie and Buzz Oates—the business launched in a small office space off Florin Perkins Road in Sacramento with a 10-foot x 20-foot material yard. O’Brien’s first hire was his brother, Tim. Within six months, O’Brien saw an opportunity to expand beyond electrical work, adding mechanical and plumbing trades to the company’s operations.

Fast forward to 2007, family members Carlton and Mike O’Brien were added to the team.

As new Mark III partners, the two focused on investing in and growing the company as a multi-trade contractor specializing in the MEP trades.

For over four decades, the company has continued to grow while leaning into innovation, remaining true to Mark O’Brien’s vision for Mark III to be a multi-trade contractor. Each trade works together to share resources, cut redundancies, reduce project schedules and lower project costs, which allows for optimized trade coordination, design and schedules. Today, the company headquarters remain on Florin Perkins Road and an additional office is located in Fresno, California.

Creating a culture of engaged individuals ready to lead the evolution of construction is not an easy feat when coordinating multiple trades, departments and locations. The first step, according to company executives, is to encourage and facilitate career development for every employee.

“Investing in our own is very important to us,” confirms Leslie Schlaegel, Chief Talent Officer and part of the Mark III talent development team. “Our team offers individualized career planning and facilitates training classes to support career growth for our employees.”

Specifically, Mark III offers an internal training program that includes a proprietary training series with topics such as Foreman Lesson Plan, Project Manager Training and more. In addition to its full-time internal efforts, the company also partners with organizations such as Plumbing-Heating-Cooling Contractors (PHCC) of California, Associated Builders and Contractors Northern California (ABC NorCal), Western Electrical Contractors Association (WECA) and the Air Conditioning Trade Association (ACTA). As well, the company has sent employees through a variety of programs at University of California, Davis (UC Davis) and California State University, Sacramento (CSUS) including the Construction Management Certificate Program at UC Davis and the Project Management Certificate Program at CSUS.

Eric Mays, part of the company’s mechanical team and a current PHCC apprentice, is one beneficiary of training opportunities offered through the company. He hadn’t thought about expanding his training until he met Carlton while the Mark III President was checking on progress at Amazon’s Metro Air Park project. Mays says, “During his visit he suggested I look into PHCC to continue my growth in the field.”

Mark Canfield, a Project Manager and longtime employee, is a testament to the career development opportunities available at Mark III. He began with the company in 1984 as an underground laborer, and has since moved through different roles as estimator, plumber, superintendent and is currently a project manager for the company’s mechanical department. He firmly believes that every individual has “the opportunity to do just about anything you want here. The only person holding you back at  Mark III is yourself.”

Danny O’Brien, son of Mark O’Brien, is also a testament to the career development opportunities available at Mark III. He started with the company at age 19 as a metal stud framer and has since become proficient in a number of trades and currently works as a plumbing foreman.

Mark III does more than use the educational programs from these organizations; the team also directly participates in program development. For instance, Schlaegel sits on the board of WECA supporting the Health and Welfare board of trustees, and Learning & Organization Development Manager Jenn Layton is on the board of PHCC of the Sacramento Valley to support annual initiatives including trade shows, events and more.

The Mark III engagement team is driven to develop an engaged team that’s excited to show up to work every day. Continues Schlaegel, “Our wellness program stands out because it genuinely promotes a sense of health around the office. Our employees have noted that taking a break from the workday to actively participate in this program has shown increased energy levels and more positive attitudes. In addition to promoting healthy lifestyle choices, our wellness program builds employee morale and helps to mesh different departments into one team.”

The company has found that co-workers encouraging one another to reach new fitness goals has promoted strong relationships between them. Some even participate in fitness events together outside of work, examples of which include running events, Tough Mudder endurance events or even hiking Mount Shasta. “Many of these relationships come from different departments that would most likely rarely engage without the wellness program,” she adds.

It’s no wonder that Mark III has been designated as one of the “Best Places to Work” for the last four years (2016-2019) by the Sacramento Business Journal. The company was also given ENR California’s 2019 Specialty Contractor of the Year honors.

In an effort to develop the best team possible, Mark III established the Culture Club in 2017. The Culture Club includes a diverse group of field employees, office and administration staff, and executive teams representing different trades and office locations. The team is responsible for hosting quarterly events and overseeing the company’s core value awards program, and even developed an interview process for the selection of potential Mark III team members that is heavily influenced by the company’s culture, mission, vision and people.

He adds, “Bringing culture and personal values into the conversation during the hiring process has not only helped us increase retention, but also establish a team of individuals who are aligned with our core values.”

In the minds of the Mark III executive team members, innovation directly translates to empowering people. The company fosters ideas and a continuous search for ways to improve processes and test new ways to deliver projects.

Sacramento’s $3.75 million Metro Air Park project, which included the virtual construction, fabrication and plumbing of an 855,000-square-foot Amazon distribution center, and the $4.1 million fast-track project for Gallo Glass to upgrade a compressed air system and HVAC system in Modesto, California, are representative of the innovative solutions that Mark III has facilitated.

With an ever-expanding group of engaged and talented individuals, Mark III is empowering its teams to change the way the company delivers projects. A fully manufactured approach to critical building components is just one example. Through Project Mountain, the company’s innovation epicenter, Mark III facilitates research and development of design and construction processes.

Makayla Oei, Project Executive for Project Mountain, says, “Driven by a desire to innovate within the construction space, we have developed a new process to deliver medical office buildings. Our approach vertically integrates the full scope of work for all trades: mechanical, electrical, plumbing, piping and framing.”

She further notes that by utilizing MEP manufactured wall panels, Mark III is “improving the quality of product, simplifying project design, reducing waste and increasing project predictability for all stakeholders.”

Early estimates indicate that Mark III’s medical-sector customers can save an average of 16% to 21% on MEP wall-framing costs while reducing field installation to a fraction of the time as compared to stick-build construction, thereby cutting construction schedules by as much as 20%.

Aligning with its vision to expose the world to a new way to build, the company is leaning on innovation to reshape the conventional build process. Mark III established a 24,000-square-foot MEP manufacturing facility in 2019 that allows the company to fabricate products for all MEP trades.

Built on the foundation of lean manufacturing principles, the MEP manufacturing facility is the first of its kind in the region and has the capacity to perform fabrication for five trades—HVAC, electrical, plumbing, process piping and metal-stud framing—under one roof. There are more than 60 functional work cells within the facility. Each work cell has been strategically designed to eliminate waste and allow for efficient changes as trade-work volumes shift from day to day and project to project.

Of note, the MEP manufacturing facility’s fabrication team has grown from two welders to 15 employees since Snyder joined in 2014. Looking ahead, Mark III has secured an additional 3.7 acres for future growth and expansion of its fabrication capabilities and other services.

The staff at Mark III is passionate about leading the charge to revolutionize the construction industry. With a vision to “Leading the Evolution of Construction”, this team of dedicated disruptors is continually encouraging innovative ideas and pushing limits within the industry. 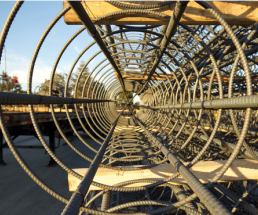 Since opening its doors in 1985, family-owned PJ’s Rebar Inc. (originally PJ’s Lumber Inc.) has been providing its cu... [Read More]