A Million Masks and More 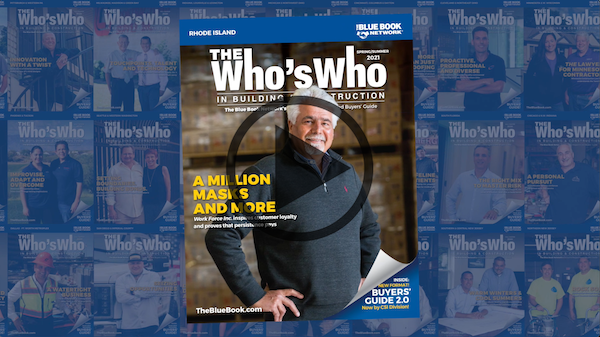 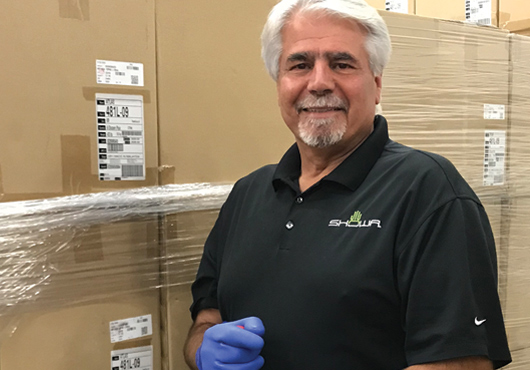 President John Orfanides of Work Force Inc. began his career as a teen working for a company that sold work gloves. Today, Orfanides’ company supplies work gloves and thousands of other products to commercial and industrial customers throughout the U.S. 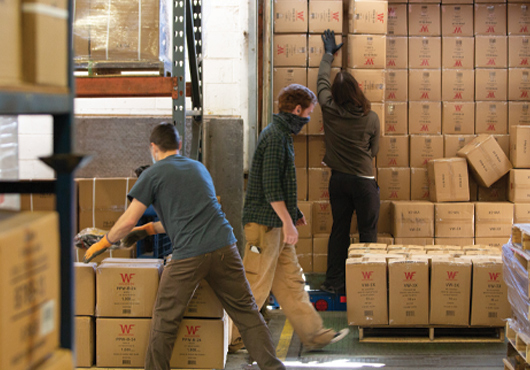 John Orfanides, President of Work Force Inc., is great at spotting an opportunity—and even better at seizing it. It’s how he’s grown the company into a nationwide supplier of high-visibility apparel in just five years. And it’s how he’s been able to evolve to better serve safety, commercial and industrial distributors for over 21 years. “We are working for the success of our customers,” John says.

Headquartered in Walpole, Massachusetts, Work Force is an importer and supplier of high-quality safety apparel, accessories and some masonry tools. “We serve small and medium-size distributors across the U.S.,” John says.

Just five years ago, a conversation with a competitor turned into an opportunity for Work Force. “By accident and by luck, I called one of our customers, who was also a competitor,” he says. John explains that, from time to time, Work Force supplied inventory for this competitor. “When he’d run out of boots or rain suits, we’d help him out. We’d been doing that for over 10 years. He owed us some money, which I was not sure we would be able to collect. I thought it was a good idea to sit down together, so we had lunch one day. He told me he was thinking of selling his business. I proposed that Work Force take over his business and he join us as an independent sales representative. We not only retained his customers, but we also gained a great sales representative and a new product offering: high-visibility apparel for the construction industry. In just five years, we tripled the amount of high-visibility apparel he was selling before the acquisition,” John says. Today, Work Force’s high-visibility shirts, raingear, hats and vests help keep construction workers safe on job sites across the U.S.

Early on in the company’s history, John spotted an opportunity in offering a wider selection of sizes and colors in disposable apparel. “Importers weren’t providing a lot of variety,” he says. At the same time, changing regulations from the U.S. Department of Agriculture (USDA) and U.S. Food & Drug Administration (FDA) were mandating additional PPE for workers in the food processing industry. “There was this weakness in the marketplace, but a high demand from customers,” he says. “We were getting about 10 calls a week asking about different colors and sizes.” Today, Work Force offers apparel like lab coats and bouffant caps in nine colors, and lab coat sizes range from small to 7X. “We found a niche early and now sell a great deal of polyethylene and polypropylene disposables for this market segment,” he says.

A chance opportunity for Work Force in October 2019 turned into a lifeline for customers when the COVID-19 pandemic hit. “Up until then, we had mainly imported our goods from China, but when the U.S. increased tariffs on Chinese imports, we began looking into sourcing products from other countries. My business partner and I traveled to Bangladesh in the fall of 2019 and met with new suppliers,” John says.

When the pandemic went into full gear in the spring of 2020, Work Force found its shipments from China on hold. “It’s amazing how much of a shortage in supply two or three months can create,” he says.

When the U.S. government designated the food processing industry as essential, the demand for PPE skyrocketed. “The food processing industry has always used disposable PPE and apparel; however, demand grew tenfold. Lab coats, aprons and masks had to be changed out more often because of heightened safety concerns,” John says. “We were getting a dozen calls a day from people looking for surgical masks, polypropylene sleeves, bouffant caps, masks and aprons. When demand grows that much and that fast, it takes everyone’s inventory off the floor. We had to carefully allocate supply.”

With Chinese imports grinding to a halt, Work Force was able to increase its inventory by proactively importing from suppliers in Bangladesh, Malaysia and Pakistan, helping to meet a critical nationwide need.

Though the company was bringing in inventory to meet the industry’s need for PPE, safety was also a concern for Work Force’s 17 employees. “We were working hard to meet customer needs while doing our best to limit our exposure as well,” John says. Out of the company’s six office employees, only two would come into the office. “My right-hand woman has a chronic asthma condition, so she would come into the office at 5 p.m. when no one was here.” To keep up with demand in the warehouse, one employee would work alone from midnight until 8 a.m., filling orders and readying them on pallets for shipment the following day. Other employees worked remotely, fielding calls, customer orders and questions. “Those initial four or five months were really tough, but we found a way to meet the needs of our clientele while keeping our employees safe,” he says.

Work Force serves 3,000 customers and carries 5,000 products stored within two 40,000-square-foot warehouses. “Even though we’ve grown, we do things the old-fashioned way,” John says. “We answer our phones. We treat our customers like family and friends. We never tell someone something that isn’t true. If we can’t handle an order, we tell a customer up front. There are no surprises with us. It’s why we’ve had some clients since even before Work Force got its start. I’ve known some of our customers for more than 40 years,” he says.

Work Force has always offered same-day shipping on products, and if an item isn’t available, a customer service representative calls the customer right away. “We don’t just back order. We get in touch and offer alternatives. At Work Force, we go the extra mile for customers,” he adds.

“There are no surprises with us. It’s why we’ve had some clients since even before Work Force got its start. I’ve known some of our customers for more than 40 years.” John Orfanides, President, Work Force Inc.

Taking on the World

John learned early on the value of hard work and going the extra mile. When his parents purchased a home in Norwood, Massachusetts, back in May 1973, the teen had his sights on earning a little extra money. A family friend tipped him off that a glove company down the street was hiring. The company sold work gloves of all kinds to commercial and industrial customers. “I started working for Safety House of New England just one month later, between my junior and senior years of high school,” he says. John started out in the warehouse, sweeping floors and unloading containers. “I primarily helped the shipping clerk,” he says.

John continued working for Safety House on the weekends and nights, as well as during breaks throughout college, learning the ins and outs of the business. “Safety House’s President Steven Berger and Sales Manager Saul Greenberg taught me so much about the business and the industry,” John explains. “I learned what to look for in a quality product, why one item is better than another and how to add value to a product line.”

Once he earned his management degree from Boston State College, John was ready to take on the world—and the glove supply business. Unfortunately, Safety House only had full-time availability in the warehouse. Instead, John purchased a neighborhood eatery and entered the restaurant industry. Though he tripled the restaurant’s revenues in just a year and a half, 13-hour days, seven days a week quickly burned him out.

“About that time, I got a call from Safety House. The company was filing for bankruptcy, and Steven was reorganizing and starting up a new company. He wanted me to take over as Sales Manager,” he says.

John honed his sales and operations skills during the next seven years, eventually offering to purchase a piece of the company. “I’d always wanted to own my own company, but Steven had kids that he hoped to give the company to, so he wasn’t ready to sell.”

With several business associates, John struck out on his own and formed Midway Glove Company. “I was a 20 percent owner in this company that specialized in knit work gloves,” he says. For 10 years, John worked to grow the company from a small regional importer but was frustrated by the limitations caused by his minority stake in the company. In 2000, John and another business partner bought out Midway Glove Company and Work Force was born.

“I had developed a following all the way back to those early days when I worked for Steven Berger. People got to like me and stayed with me through the years. When I formed Work Force, I had greater latitude to grow the business. I’ve known these products since I was 17 years old. I like the freedom of doing business, of offering the right product for the right price.”

John says he is incredibly grateful for the support of customers and the growth of his business over the years. So much so that he is always looking for opportunities to give back. “We have never stocked a great number of N95 masks, but when the pandemic hit, we took what we had and got them out into the community, donating to Lakewood Ranch Medical Center in Lakewood Ranch, Florida, an assisted living facility in Canton, Massachusetts, and even to a gas company driver, who was considered an essential worker,” he says.

The company also met a community need for surgical masks. “We had a local Dunkin’ manager asking for masks for his employees. We gave him enough to get him by until he was able to find some to purchase. Another customer asked if he could buy some for his family. We gave him several boxes. I’d tell customers, ‘We don’t have any for sale, but for you and your family, we will give them to you at no charge.’ ” Additionally, Work Force donated surgical masks to Pine Street Inn, a homeless shelter in Boston, Massachusetts.

John believes it’s important to help people in need as much as you can. “When someone calls for help, you do it—whether it’s a food processing distributor needing disposable aprons, gloves and bouffant caps or a hospital or assisted living center in need of masks.”

And John never gives up on a potential customer. “We’d been chasing this one customer for 30 years, but he never gave us the time of day. He called us one day recently out of the blue, desperately in need of lab coats. I gave him a fair price and now he’s one of our better customers,” he says. “We always try to do the right thing without expecting anything in return. I think that’s what people like about us, and I think it’s why customers have stuck with us over the years.” 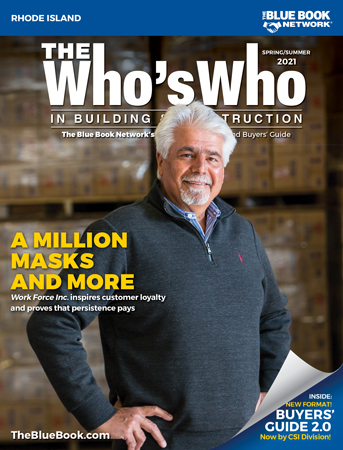