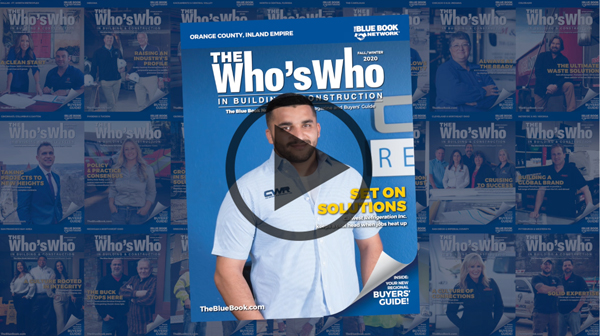 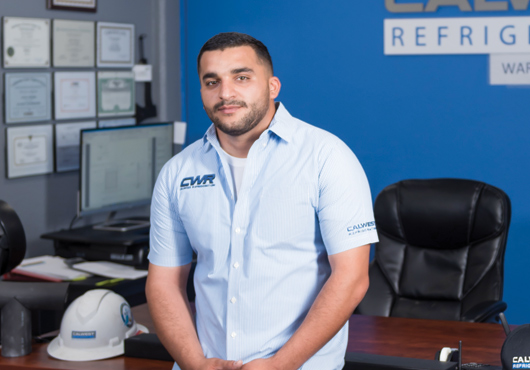 CEO A.J. Milbes heads up Calwest Refrigeration Inc., a commercial refrigeration company that serves customers up and down the West Coast. 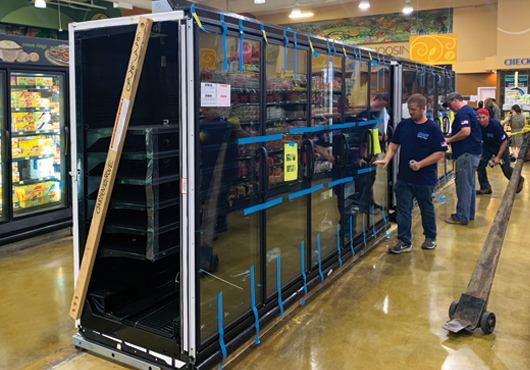 A.J. Milbes, CEO of Calwest Refrigeration Inc., remembers his first day on the job. In his early 20s, while earning his certification in heating, ventilation, air conditioning and refrigeration (HVAC/R) from Brownson Technical School in Anaheim, California, he got a job working for a small commercial refrigeration company nearby. “I showed up on my first day of work wearing a tie, button-up shirt, nice pants and dress shoes. Everyone laughed at me,” he says. A.J. soon learned why. He spent the day doing the dirty work of refrigeration, clamping pipe and running insulation. “I’d never done this type of work before, and I didn’t know what to expect,” he recalls, laughing at the experience.

But A.J. has always been hardworking, and he didn’t let the initial mirth stop him from excelling at that first job. The next day, he left the tie at home and brought a tenacious spirit instead, working long hours to keep customers’ inventory cool.

The work ethic he showed on that first job is the work ethic he and his team bring to each and every job at Calwest Refrigeration, a commercial refrigeration company that serves customers up and down the West Coast. Headquartered in Grand Terrace, California, the company keeps refrigeration systems, air conditioning and walk-in coolers humming for supermarkets and heavy commercial customers including meat-packing plants and bottling companies. “Anything that gets cold—from frozen vegetables and meat to walk-in coolers to comfort cooling like air conditioning—you can find us fixing it,” A.J. says.

“I look at us like firefighters,” he says. “People always tell me that I talk fast, eat fast and walk fast. I know I’m a fast-paced kind of guy, but we have to have that sense of urgency when it comes to these emergency calls. When a commercial freezer or refrigeration unit goes down, there are millions of dollars of inventory at stake. We’re putting out fires every day at Calwest Refrigeration.”

Fires like a walk-in cooler that went down in the dead of summer in southern California. “We got the call at 1 a.m. that the cooler had died. We immediately got on the phone with the manufacturer’s parts house. By 4 a.m., we had a crane scheduled to install the new unit. The new walk-in cooler was in place by 6 a.m., and by 7 a.m., it was at temperature.”

Another emergency call had the company rushing to find a replacement cooling tower, which removes unwanted heat from the chiller. “This is a very large piece of equipment that isn’t just kept on hand. It takes eight weeks to manufacture a single unit,” A.J. says. Months before, A.J. had cautioned the customer that the tower needed to be replaced, and just three days before it failed, A.J. again told the customer the tower was on its last leg. “When the tower failed, everything went down—every single refrigeration unit, the AC, the freezer and cooler. The supermarket was dead in the water, and of course, it was right in the middle of summer.” The company located a used tower, rented a truck and had the refurbished unit installed by the third day.

“We’re all about finding solutions. That’s what we’re focused on,” he says.

Calwest Refrigeration has both construction and service departments. “We design and build the refrigeration and cooling systems for supermarkets and industrial facilities,” A.J. notes. That means putting in place every piece of equipment related to cold storage—from walk-in coolers and refrigeration units to refrigeration racks and cooling towers. “What we do is so much more than installing a refrigerator. There’s piping overhead, underground and in the walls. The process can take three months to a year,” he says.

Once a client approves the initial design, the company’s in-house engineering team brings the design to life, ordering equipment, managing the installation and running tests to ensure the system works as designed. “Our team does everything from A to Z, from concept to construction. We do the heat load calculations, the sizing, electrical and energy management,” he says.

And once a project is complete, Calwest Refrigeration offers remote monitoring services. “We make sure the system runs properly at all times. If a refrigerator case starts running hot, we are alerted and can send someone to fix the issue before it becomes a problem,” A.J. says. Additionally, remote monitoring can zero in on equipment inefficiencies. “We can see how much energy a piece of equipment is consuming and offer solutions, like upgrading a motor, to help customers save money on electrical costs.”

The company’s in-house engineering team helps customers find solutions to sometimes difficult problems. “A medical manufacturing facility in Palm Springs was having trouble figuring out the best equipment for their needs and turned to us,” A.J. says. “Most standard equipment works up to 115 degrees. In this facility in Palm Springs, the temperature can get up to 120 degrees, and the existing unit kept failing. Our team researched options and found equipment that performs well in this unique environment.”

A.J. has always been focused on solutions. At age 20, he was trying to figure out what to do with his life. “I had gone to school to become an auto mechanic, but figured I wasn’t going to make too much money in that field,” he says. “At the time, I was working on and off for my dad’s Super Penny Mart in San Bernardino. Next door there was a supermarket, and I had noticed that the refrigerators and freezers were always going down. So one day, I walked into the store and told them that if they would pay for me to go to school, I’d make sure their equipment always stayed running. They said yes on the spot.”

A.J. left for school at 5 a.m. each morning to make the hour-and-a-half drive to Anaheim. Once school ended at 2 p.m., he’d head on over to his job with the small refrigeration company, sometimes solving problems into the wee hours of the night.

“In my first month on the job, I knew this field was for me. I’d go to a new customer site and work on a new problem every day. I was already very technically savvy, and the work came easy for me,” A.J. says.

Though the technical know-how came easy, it didn’t mean every project was smooth sailing. “I remember my first service call. An entire meat department was down. I arrived at 6 or 7 in the [evening], and I stayed there six hours until I figured out the problem,” he says, adding that he finally discovered the problem by accident. “I was shining my flashlight here and there and bumped into a wire. It arced and I looked to see where it had flashed. The wire had broken and was no longer making contact. I put those two pieces of wire together, and I immediately heard the valve open up and the equipment kicking into gear. That was a good feeling. I’ll never forget that service call.”

A.J.’s tenacity on the job kept him from earning the top spot in his graduation class. “I had the best scores out of anyone, but I missed a couple of days of school because I had worked all night and the professor told me to go home and get some rest,” he says. A.J. admits that first company overworked him but is still thankful for the experience. “Had I gone to work at a larger refrigeration company, I never would have learned the amount I learned from that first job.”

Once he graduated from the yearlong program, A.J. began working for the supermarket company, where he was the sole HVAC/R technician for nine stores. “That was brutal—20-hour days, sometimes 150 hours a week. I once had to swap out a 300-pound compressor all by myself,” he recalls.

After three years, the supermarket company was sold and A.J. was released from his five-year contract. He then went back to work for the refrigeration company where he’d started. “I ran the service, construction and control departments,” he says.

In April 2016, A.J. struck out on his own and formed Calwest Refrigeration. “I had no money, no support. I purchased my first service vehicle for $3,000 at an auction and got it fixed up for $200. It didn’t have a shell on the truck bed, so after working 16-hour days, I’d have to unload all my tools at night,” he says.

But as the summer heated up, so did the company. “That summer it got up to 115 degrees at times. Word traveled quickly about the quality of my work, and I stayed busy,” he says. By July, A.J. had secured his first service contract for eight supermarkets. “That was a gamechanger. Instead of just doing service calls, I finally had steady income.”

One contract led to another, and A.J. was soon adding employees, trucks and equipment. “In those first few years, I didn’t take a paycheck. I put everything back into the company. I owe my wife so much for sticking with me during those early years,” he says.

Though A.J. has a team of HVAC/R professionals, he is on the job by 6 a.m. every day, leading by example. “I’m not one of those bosses who roll in at 9 a.m. and leave by 5 p.m. Employees see what I put into my work each and every day, and they want to do the same. I’m always looking for ways to constantly improve. If something’s good, I’m looking for ways to make it better. That’s how we go above and beyond for customers,” he says.

And though no one wears a tie and dress shoes to the job, the team is always outfitted professionally. “Everyone wears the same uniform—whether you’re in construction, service or engineering. Consistency matters. When we show up on-site, customers see the same clean Ford van with our nice clean logo on the side,” he says.

When not serving customers, the team enjoys serving the community. “We’ll do pro bono work here and there for nonprofits and seniors needing AC repair,” he says. Additionally, the staff has volunteered for a local food drive. “We teamed with a local nonprofit. We bought the food, assembled the packages and gave it out to the community,” he adds.

“They say that you can’t give out water if you don’t have any. In those early years it was tough getting by—I got more than my share of eviction notices—but now that I have some money, it feels really good to give back and to help those who are struggling,” A.J. says. 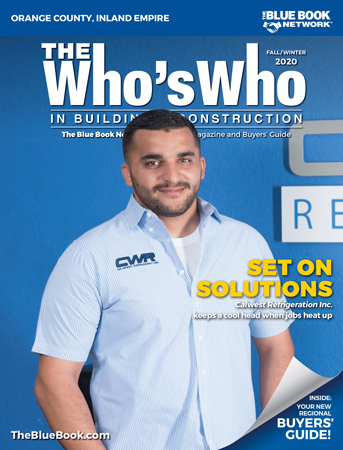