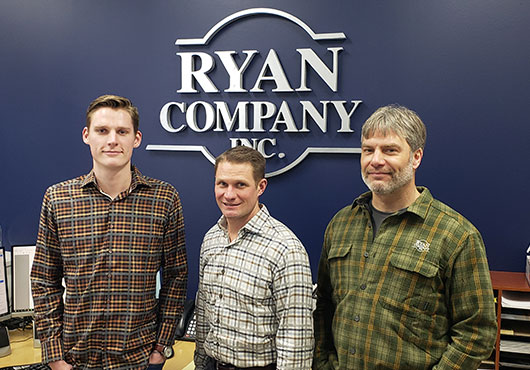 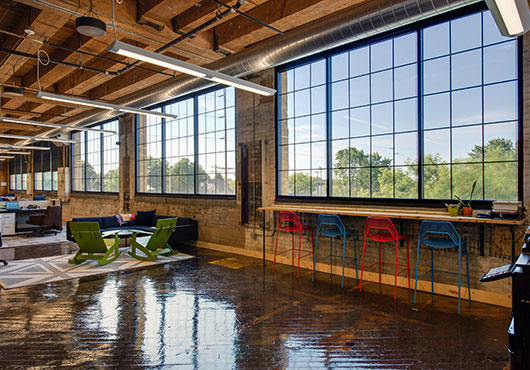 Ryan Company Inc. has also been the contractor for most of the tenant spaces at 755 Prior Ave N, creating a mix of private conference and work rooms and open-concept offices while preserving the building’s historic character.

What started out as two friends teaming up to start a general contracting firm has evolved into a 42-year-old company that specializes in complex and challenging commercial and industrial projects throughout the Midwest.

“Michael (Mike) Ryan and my father, Howard Hornibrook, went to high school together and would often run across each other working in the construction industry,” says Matt Hornibrook, President of Ryan Company Inc., located in Osseo, Minnesota. “Mike Ryan started Ryan Company in 1978. After working together on several projects, Mike and Howard formed a partnership. Mike ran the office and managed the estimating, while Howard ran the field operations. It was a good marriage in terms of the different skill sets that both men brought to the table.”

With Matt now at the helm, the vision on which Mike and Howard founded the company continues to thrive more than four decades later.

“All throughout my childhood, I would go to work with my dad on Saturdays and help with odd jobs,” Matt recalls. “I would clean out his truck or sort through piles of nuts and bolts. Because I was always around the business, it was natural that I would have an interest to work in this industry.”

After graduating from Iowa State University in Ames, Iowa, in 2005 with a degree in construction engineering, Matt started working full time for  the company.

“The original plan was that Mike and Howard would officially retire around 2018, but in reality, they started stepping back from the business 10 years ago,” Matt says. “The official ownership transition occurred in 2017.

“It’s a testament to Mike and Howard as to how well they groomed me and other key staff in our positions. Because of their diligent succession planning, it was a very comfortable transition. There were no real hurdles to overcome. We were able to hit the ground running and establish new client relationships while still maintaining the solid base of repeat business that Mike and Howard had carefully built over the years. I’m very appreciative and grateful for all they did to set us up for success.”

Putting Their Expertise to Work

Delivering innovation and value to all clients has been a Ryan Company mantra, regardless of the types of projects or services needed. “Repeat customers and established relationships are more important to us than just winning a bid,” Matt says.

One project that Ryan Company is particularly proud of is the Jewish Family and Children’s Service of Minneapolis (JFCS) building in Minneapolis, completed in 2018. JFCS is a nonprofit organization that provides programs, services and support for thousands in  the community.

“We gutted and renovated an existing 65,000-square-foot office and industrial building that now serves as a permanent home for the JFCS organization for the first time in its 110-year-old history,” Matt says. (JFCS previously rented office space that never truly met their needs.) “What made this project meaningful is that, for more than 40 years, Ryan Company worked with Ralph and Andy Stillman, a father-and-son team who owned and operated Amport Foods, among several other food-related businesses, on a variety of projects, including their 108,000-square-foot plant relocation and many production area improvements.

Another project that demonstrates Ryan Company’s diversity is 755 Prior Ave N, a 485,000-square-foot, multistory industrial facility located in St. Paul, Minnesota. Built in stages by owner Silgan Containers between 1900 and 1970, the site served as a metal can manufacturing facility until the early 2000s.

“The property was converted into a multi-use flex space that attracts a variety of tenants, including workout, yoga and photography studios, a small college, a brewery, an axe-throwing business and a coffee company,” Matt explains. “Because the tenants are so diverse, each requires different needs in building out their spaces. Ryan Company provided the steel stud framing, the site concrete and masonry and steel fabrication for the building. We’ve also been the ‘go-to’ contractor for most of the tenant spaces and all the common spaces. The project has been ongoing for seven years and has allowed us to showcase many of our in-house capabilities, as well as bring in some of our specialty subcontractors.”

“We understand the impact that construction operations can have on our clients’ daily business,” Matt says. “In particular, food manufacturing facilities operate under very tight deadlines and can’t afford to be shut down for extended periods. When one of these facilities is scheduled for an upgrade or an addition, we must work fast and efficiently. In addition, a lot of these companies don’t want diesel- or gas-powered equipment used inside their buildings, even if the facility is completely shut down, because they don’t want any contaminants inside.”

Recognizing an opportunity to better serve their clients’ needs, Ryan Company retrofitted an excavator that runs on electricity, instead of gas or diesel. “Building this special excavator helped us minimize certain challenges in the food manufacturing sector,” Matt says. “We pride ourselves in taking on specialty and complicated projects that other contractors shy away from. Finding creative solutions that make us more effective in our work is when we really shine.”

Jared Allen, a retired football player from the Minnesota Vikings, founded Jared Allen’s Homes for Wounded Warriors in 2009 after returning home from a USO trip to U.S. military bases in the Middle East. The nonprofit organization raises money to build and remodel injury-specific, accessible and mortgage-free homes for critically injured U.S. military veterans.

“Ryan Company donated the placement of the site concrete and the garage slab for a new home that was being given to a wounded veteran living in Minneapolis,” Matt says. “We were proud to be affiliated with Jared Allen’s organization on such an important and meaningful project.”

Today, Ryan Company employs approximately 25 tradesmen year-round, including carpenters, masons and welders. “We have a strong team of leaders, many of whom have been with us for decades,” Matt says. “We also have an established network of quality subcontractors that we rely on when the scope of work gets large. This combination of resources and experience has helped us successfully build and maintain ongoing relationships with all our customers.

“We recently celebrated our 42-year anniversary. With so much of our business being repeat customers, name recognition is generally not an issue, but to some there can be confusion between us and several other Twin Cities-based companies with similar Irish names. We take pride in clearing the confusion one relationship at a time.” 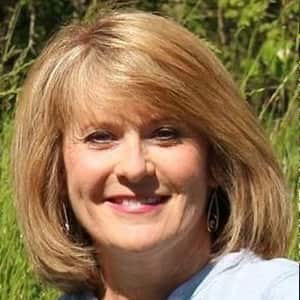 Meredith Wargo has over 30 years of experience in writing about AEC people and projects. Her first book was recently published. 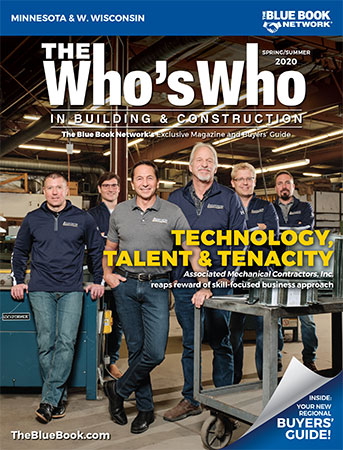