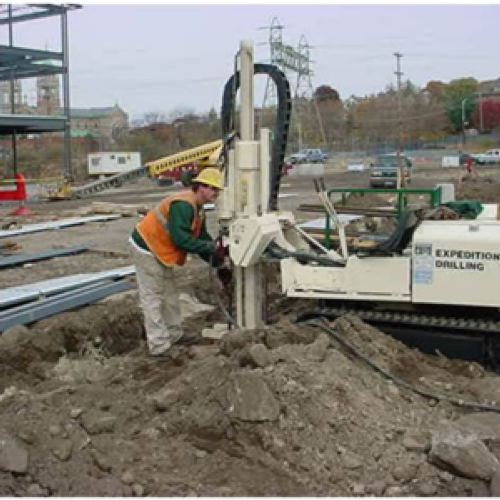 GZA was able to assist the City of Woonsocket, Rhode Island obtain regulatory closure within 1 year for an impacted site using an innovative green bioremediation technology. Using federal Brownfield funding, Rhode Island Department of Education Grants, municipal bonds and former owner contributions, the City of Woonsocket purchased a former manufacturing site that had been impacted by chlorinated volatile organic compounds (cVOCs). The City wanted to beneficially reuse the site as Woonsockets Middle School. While most of the cVOC-impacted soil was excavated and disposed of off-site, a large tetrachloroethene (PCE) plume with concentrations up to 850 micrograms per liter (g/L) remained, which flowed towards the adjacent Blackstone River. The impacted aquifer occupied a groundwater pore volume of approximately 4,500,000 cubic feet and was located between the two middle school buildings where construction had been initiated. The project was time sensitive and the City wanted to achieve regulatory closure within one year of the start of remediation for funding purposes. Gilbane Building Company, the Citys Construction Manager, selected GZA through a quality-based competitive bidding process to perform environmental engineering services to remediate the impacted groundwater. GZA proposed performing in-situ bioremediation using a slurry-phase organic additive to enhanced reductive dechlorination (ERD) of the cVOCs. The unique additive program offered several advantages: ERD is an in-situ, green and sustainable program; In-situ bioremediation does not have remaining aboveground, power-consuming equipment after the initial injection, so construction could continue without interference; and GZAs proposed ERD program was more than $250,000 less than the other competitive bids. Based on the list of cVOCs and their respective concentrations in groundwater, GZA proposed bioremediation using a slurry-phase organic-carbon-based additive to treat the cVOC source area and dissolved-phase plume. GZA applied for and obtained approval for a permit from the Rhode Island Department of Environmental Managements (RIDEM) underground Injection Control Program for the injection of the additive and monitoring of the performance. GZAs approach for the Site, which was implemented in November 2008, involved: Installing eight (8) shallow groundwater monitoring wells to a depth of 25-35 feet below ground surface (bgs) and two (2) deep monitoring wells ~65 feet bgs; Installing four (4) shallow groundwater monitoring wells along the centerline of the plume to perform the dye tracer study; Injecting the additive using direct push technology (DPT) in twenty-eight (28) injection nodes in the PCE source area and twenty-six (26) injection nodes hydraulically downgradient of the source area with depths up to 70 feet bgs; and Injecting food-grade dye along with the injection slurry to serve as a visual tracer for rapid evaluation of the area of influence. Based on groundwater performance monitoring results, the project met its performance goals to reduce cVOCs and vinyl chloride concentrations to RIDEMs GB groundwater standards. The goals were met within six (6) months of the injection with no rebound of cVOC concentrations observed over the one year of monitoring. The site received RIDEM approval for final closure within one year of injection and the school project was completed, resulting in beneficial reuse of the brownfield site. GZA is proud to have contributed to this innovative bioremediation project, demonstrating our commitment to green remedial approaches to achieve economically and environmentally sound solutions for our client. This remedial technology is another effective solution for GZA to provide clients who are challenged with returning environmentally impacted properties to productive use.