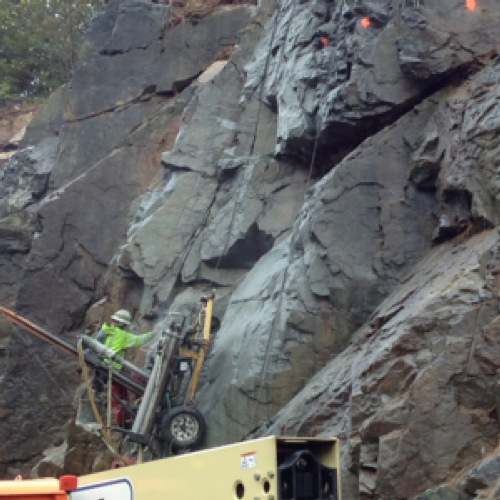 When the Resident Engineer noted that the widened roadway would be in close proximity to the existing rock cut slopes, GZA was called in to visit the site and made the preliminary assessment that several slopes presented a risk of rock fall to the new travelway.

GZA mobilized a two-person crew for a total of 23 days of field mapping from the ground surface and on a ladder, 5 days using a bucket-lift, plus 2 days of geologic field reconnaissance by the project geologist to complete bedrock mapping and evaluation of nine separate rock exposures covering approximately 4,000 linear feet of the alignment, along the median and outside shoulders.

The crew measured strike, dip and other pertinent data of over 1,300 discontinuities, and they located each observation point via GPS and recorded the field data directly into a GIS database along with high-resolution photographs of the rock slope feature.  In addition, GZA personnel field characterized the continuity and spacing (potential block size) using field measurements and scaled photographs and visually identified at-risk blocks.

The field data were imported into software (DIPS and SWEDGE) that created stereographic projections, and expedited evaluation of possible plane, wedge and toppling failure modes. The evaluation showed that large-scale plane or wedge failures were unlikely in most areas, but did identify localized areas of at-risk planes and wedges.

The team assessed the block sizes likely fall from the slope and measured slope section/ditch geometry for use in rock fall catchment evaluation, which was performed using the Colorado Rockfall Simulation Program (CRSP). The team found that with minor modifications, the catchment was generally adequate.  However a number of areas of the median rock slopes had unsuitable catchment due to local launch points or inadequate catchment geometry.

During implementation, GZA provided full time GZA monitoring of scaling activities, and evaluated risk areas exposed by scaling.  GZA’s field engineering team used rope-access techniques to assess conditions and gather field measurements.  The measurements were used by GZA and the Scaling  and Slope Stabilization Contractor to develop and implement rock dowel stabilization solutions for several at-risk locations along the slope. A localized area was identified with a large, actively weathering seam that ran nearly parallel to the scaled face.  Since the weathering was water-driven, GZA’s solution was to scale and shape the top of the seam, then install dowels and resurface with gunnite to promote runoff and eliminate the infiltration judged to be the cause of the weathering.