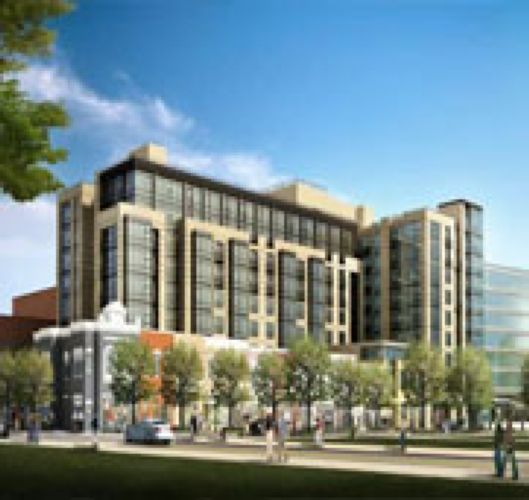 The Joint Venture of James G. Davis Construction Corporation and Gilford Construction (Davis/Gilford) served as General Contractors for construction of Progression Place, a 380,000 sf mixed-use development anchored by the United Negro College Fund (UNCF) at the corner of 7th and T Streets, NW, in Washingtons Greater U Street Historic District. In addition Gilford served as General Contractor for the interior build-out of UNCF space (approximately 50,000 sf on 4-1/2 floors). The site is adjacent to the historic Dunbar Theater, a popular jazz venue and movie theater that opened in 1921, and the Howard Theater, which recently underwent renovation to restore the building to its original 1910 faade and grandeur. Placed on the National Register of Historic Places in 1975, the Howard Theatre was the nations first full-sized theater for African American audiences and entertainers and a showcase for black musical, theatrical, and comedy talent for more than 70 years. Progression Place also serves as a catalyst for further redevelopment of a Seventh Street neighborhood that has been dormant for 30 years. The planned LEED Silver development construction of a 7-story office building (120,000 sf); a 9-story residential tower encompassing approximately 213 rental units (200,000 sf), retail and entertainment venues (38,000 sf), and shared below-grade parking (90,000 sf on two and a half levels). The project was atop Metros Green Line and the entrance to the Shaw-Howard University Metro Station is located in the buildings plaza, thus required significant coordination with WMATA. The project also encompassed the reuse of ten historic buildings as retail and restaurants, and demolition of one existing building (1851 7th Street, NW). The faade of the building located at 1849 7th Street, NW was retained and restored otherwise it would have been demolished. The residential tower is sited behind the historic buildings that define the intersection of 7th and T Streets in order to preserve the sites historic nature. Gilford Corporation provided Preconstruction and Design Assist services for over five years on this project including assisting the Developer in formulating a construction program that is compliant with the projects Proforma concept and plan for this Guaranteed Maximum Price (GMP) contract.