Top of the Heap 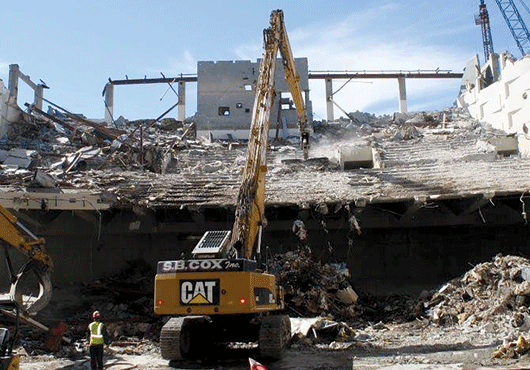 A careful step-by-step deconstruction process was used to take down the Gaillard Municipal Auditorium in Charleston, S.C. 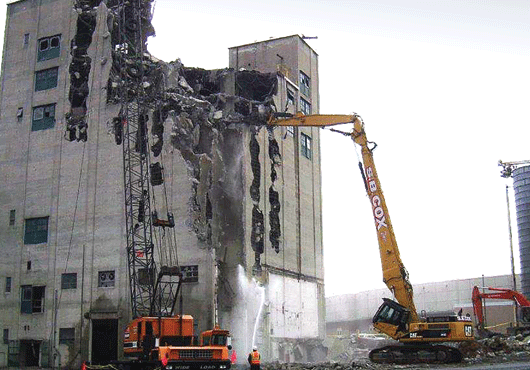 Careful planning and the right equipment were essential in this total demolition of a co-op grain elevator in Harrisonburg, Virginia.

Since it began in 1963, S.B. Cox, Inc. in Richmond, Virginia, has built a reputation of safety and efficiency while helping to preserve natural resources. Since the beginning of its demolition work, the company has had a knack for reusing or recycling as much as possible from buildings. There were times when much of the materials went to the landfill, but that’s no longer the case. In one of its recent projects, S.B. Cox was able to reuse and recycle nearly 90 percent of the materials used. Over the years, the company’s ability to anticipate and adapt to industry changes has helped it to grow and thrive.

Currently, S.B. Cox employs about 250 people and is the largest demolition contractor in Virginia. S. Barbee Cox III, son of the Founder, took over as President in 2000 when his father, Sidney Barbee Cox Jr., retired. “We’re a family-run business and take pride in what we do. We also have a lot of very good employees who are like family. They’re moving up the ranks to manage the business,” says Cox. The company’s managers, treated like family members,  appreciate the firm’s strong leadership history.

Sidney Barbee Cox Jr.’s keen sense of opportunity is a major reason why the company has maintained a leadership position in the industry over the years. When he started the company it was simply an excavating and hauling business. As he got more calls from contractors asking if he wanted to work on demolishing houses, he decided to transition into that line of work, which included reusing and recycling materials.

“In the 1960s, there was a lot of reuse of building materials, so we started selling the used lumber and brick because there was demand for it. My father continued to grow the business because demolition was a specialty. Few people could do the work because it required big equipment, such as a large crane to knock down the buildings. As our reputation spread, we expanded our work area to within 350 miles of Richmond,” notes Cox.

From 1963 to 1984, the company focused on demolition work, but there were peaks and valleys in available work. “We’d be very busy and then have nothing, but my father was wise enough to find other opportunities. In 1977, he established his first landfill near downtown Richmond and started hauling construction debris, which no one else was doing at that time. Also, some of our contractors went into the roll-off container business, so we bought a truck and a few cans to try that as well.”

His father’s strategy for diversification provided regular income, utilized existing facilities and equipment, and put the company in a unique position to where it had very little competition. Certain early ventures are still part of the S.B. Cox portfolio, such as a portable toilet service, roll-off containers, and ready-mix concrete.

“We had some failures, but we quickly got out of any that didn’t work, such as the commercial garbage business. But even the ‘failures’ sometimes opened doors for us. Morgan Nelson, an ambitious young man who was running our garbage business, also had experience in ready mix, a business my grandfather had been in. So my dad had Morgan take over the ready mix side of our business. He is now President of S.B. Cox Ready Mix, which is now one-third of our company,” says Cox.

Maintaining a Culture of Safety

Throughout its expansion, S.B. Cox built a reputation for getting jobs done safely and efficiently. Why? Because the family takes safety personally.

“We don’t want anyone to get hurt and we consider safety to be very important. Plus, with the way the construction industry has changed, if you’re not going to work safely you’re not going to work,” says Cox, who emphasizes that demolition is still very dangerous work. “We provide all of the necessary safety equipment and hold a weekly safety meeting. Then, one day each year, we stop all work and have a safety academy where we go over what’s new in safety, stats on different operations, and new equipment.”

Although equipment advancements have made demolition easier, challenges remain the same, notes Cox. “It’s deconstruction. You’re going the exact opposite way from putting up a building, so you need to know both sides of that equation – how it goes up and how it comes down.”

Cox is a hands-on owner who does a little bit of everything, and takes time to get to know his staff and his clients. “Our service has to be the best or customers will go to someone else. I spend half of my time in the office estimating, problem-solving or working with clients. The rest of the time I split between our other services and being out on demolition projects,” he says.

When the company first got involved in the demolition trade, it tried to recycle or sell all of the materials pulled out of buildings. But in 1970s and 1980s, the market for used materials dropped, so more of what was knocked down went into landfills. Then, environmental regulations on landfills and awareness of asbestos dangers came into the picture. Now, the company segregates materials and recycles everything possible.

The highest percentage of recycling and reuse the company has reached was on its Cloverleaf Mall project in Midlothian, Va., an 800,000 square-foot shopping mall built in the early 1970s. S.B. Cox was able to reuse or recycle nearly 90 percent of the materials on this project. The concrete and masonry were crushed on site and half of it was converted back into product for a new parking structure. All of the extracted metal went to a recycler.

As environmental aspects evolved, so did business processes.

Cherishing the Rewards—and the Challenges

The company’s way of doing business has changed, but its dedication to quality remains the same. “In the early days, to estimate the work you walked around the building, and wrote a quote on the back of an envelope or maybe just worked on trust with a handshake. You’d do the job, send out a bill and get paid. Now it’s more competitive and complicated. We try to keep historical data on projects and have a good feel for the amount of loads and materials that will be generated from a building and what we can do with those loads. But every building is different so each job has its special needs,” says Cox.

One of Cox’s favorite projects is the Bristol Regional Medical Center, a 450,000-square-foot hospital in Tennessee. “This was in 1995 and was my transition from being a field manager to supervising a large job by myself. It will always be very special to me. At the time, it was one of the largest jobs S.B. Cox had ever done and it was 325 miles from Richmond. I took one man from Richmond and hired everyone else locally. It was my opportunity to spread my wings and fly, and it gave me a lot of confidence. Five years later, I was running the business,” he says.

One project the company is now working on shows the company’s longevity in the demolition trade. “We’re starting on the Dominion Workplace project, a new office building in Richmond for Virginia’s major power provider. The project takes up an entire city block and it’s the second time we’ve worked on this site. We were previously here in the early 1970s, and took down one-fourth of a building so that a new one could be built. Now we’re taking it all down.”

What keeps Cox going? “The demolition business is still  the most rewarding and challenging of all our businesses. We’re always looking for a better, faster, safer way to do things,” he says. “Also, my father was very good at anticipating change. He took something very good and made it better. That’s our reputation and I enjoy doing what I need to maintain it.” 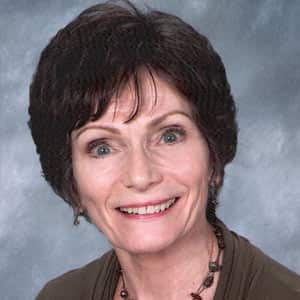 Marge O’Connor is a writer serving the international AEC community for more than three decades. Her storytelling skills are lauded by Who’s Who readers nationwide. 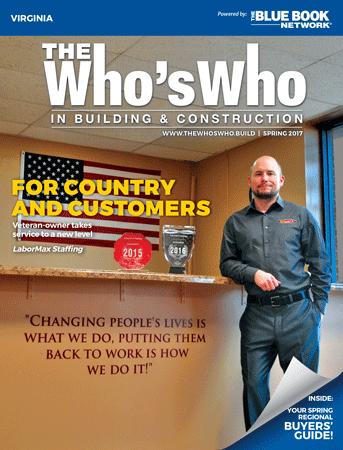