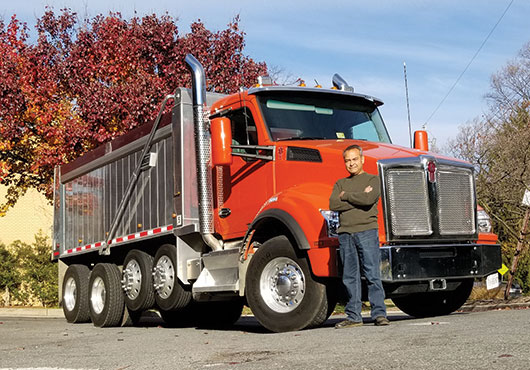 Rick George, owner of Paveco Asphalt Paving and Sealcoating, with his company’s new Kenworth quad-axel dump truck. Paving has long been a family business, started by Rick’s dad and two uncles back in 1958. 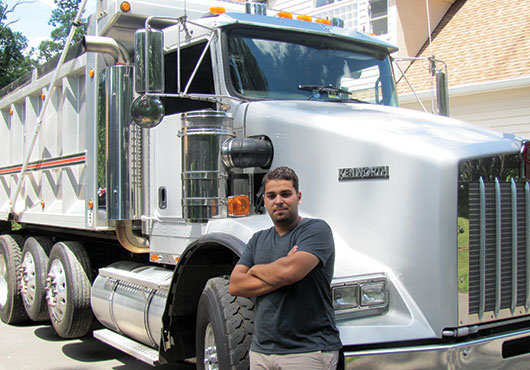 I’d sit on his lap in that big old Buick
and steer as we drove through town
He’d tousle my hair and say son take a good look around, this is your hometown
—Bruce Springsteen, “My Hometown”

The bond created between a father and a son through a motorized vehicle creates lifelong memories. In the case of the George family, little boys operating “big boy” toys morphed into a successful family business.

“When I was a little kid, my joy was going out and climbing on my dad’s equipment,” Rick George says. “My dream at five years old was to have a business like my dad and to do paving work. It’s all I’ve ever known. You couldn’t buy paving machine toys back then, so I’d make them myself out of blocks of wood, and built roads out of dirt and mud. My grandson just turned five, and he’s fascinated with big trucks and equipment just like me and my son. He can sit in my lap and drive a truck and a skid loader. He loves it.”

Rick, 54, is the owner of Paveco Asphalt Paving and Sealcoating, which he founded in 1986. Paving has long been a family business, started by Rick’s dad and two uncles back in 1958. As a youngster, he was fascinated with the paving machines and equipment. Playing with his Tonka toy trucks wasn’t as cool as sitting on his father’s lap while he operated a paver. The same path has been followed by his son, Josh, who is now a job supervisor for Paveco.

At the age of 12, Rick’s summers didn’t involve going off to camp or other recreational activities. Rather, he and his brothers were working on job sites with their father, Joseph George.

“I was working as a roller operator, tamp man and I even drove trucks on site at times,” Rick says with a laugh.

By the time he was 17, the youngest of five brothers, Rick had enough experience to supervise a job on his own. His three oldest brothers also worked for their dad, and Rick being the youngest was always bossed around by his older brothers.

By his early 20s, he was selling jobs and creating business in addition to doing onsite work. His proclivity for the work and his drive for success led to him to branch off and create Paveco Asphalt Paving and Sealcoating, moving from Houston to Virginia in search of a better job market. His company was originally located in Fredericksburg, Virginia, before moving to Centreville, Virginia. The company’s office is currently located in Nokesville, Virginia.

Josh, like his father, Rick, has fond memories of hanging around his dad’s work.

“I think I was about seven years when my father took me along with him to pick up a new paving machine,” says Josh, now 24. “I remember telling him, ‘If we get another paver, then you can drive one and I can drive one.’ And my dad has similar stories with his dad. So the family aspect of our business is one of its strengths. I’m grateful that his father and my father have secured a future for me, and I want to do that with my children.”

Asphalt in Their Blood

With paving work in the family’s DNA, the success and growth of Paveco has been predicated on the hands-on attention to detail that has been ingrained from one generation to the next.

“I bid on every job we do. I’m involved with the jobsite work, and I see every job through to completion,” Rick says. “Quality control is most important. We make sure that our guys don’t get in a rush to get a job finished. We want the customer to be happy with our pavement work. We don’t want to get a good reference six months after the fact; we want it for 20 or 30 years.”

Lindsey Reines, former owner of Reines RV Center in Manassas, Virginia, has used Paveco on several occasions at various properties around the state..

“With my RV and car lots, there is a lot of pavement work because of the weight of the vehicles,” Reines says. “One of the lots had an underground spring under the asphalt. Rick’s company installed a drainage system underneath the pavement to make it right. If it’s a start-from-scratch project or repair or resurfacing job and it involves asphalt, his company can handle it. Unfortunately, there are some shady folks in the asphalt business, but I trust Rick and his word is his bond.”

Josh’s on-the-job experience has helped assuage any doubts that his co-workers might have of him getting his position based on bloodlines.

“There’s an image of a boss at a desk being in the background and cracking a whip,” Josh says. “I try not to act like that. The workers pull a lot of weight, but there needs to be a boss—a leader at the front—helping them do their best work. I can’t just bark orders, I have to set the example. We have 10 full-time employees, and we try to keep them involved with the decision-making so they feel involved and invested.”

Paveco has state-of-the-art paving equipment and uses machinery that would typically be used on large commercial jobs. The company utilizes the same commercial equipment on its residential jobs as well, which provides the bulk of the company’s business. That’s another factor that helps make sure the work is high quality.

“Sometimes the asphalt we work with hasn’t been manufactured or heated properly,” Josh says. “There are also variances when you’re working on the ground where it can shift and cause cracks. In those cases, we’ll always make it right. The bottom line for our company is to do work that the customer doesn’t have to worry or think about for years. In a best-case scenario, the shelf life of a residential driveway is about 20-plus years.”

In the Mid-Atlantic region where Paveco is located, one of the challenges is booking 12 months of work in what is basically a nine- or 10-month calendar.

“If you’re a reputable paver, you don’t do work during the winter months,” Rick says. “We use that downtime to do maintenance and upkeep on our equipment.”

“Business is good, but I want to go to the next stage,” Rick says. “The last eight years have been challenging with the economy, but we are looking forward to expanding in the 2018 season by taking on more commercial projects.” Rick plans to maintain a personal hands-on approach with commercial projects, just as with residential customers, to bring greater benefits to every client.

Paveco currently does about 40 percent commercial work with the rest being residential. The goal is for Rick to run commercial jobs while Josh runs the residential work.

“Right now, we’re crushing the residential work we do,” Josh says. “Commercial work is going to be the next chapter for Paveco. I’m looking forward to helping push the envelope for the company.”

Another option for expansion is finding or developing a jobsite supervisor who can maintain the quality control that Paveco demands. “I’m looking for that person,” Rick says. “We’ll need people who can run sites following our religion of paving,” Josh adds with a chuckle.

Perhaps those new employees might be people who sat in their fathers’ laps behind the wheel and “drove.” 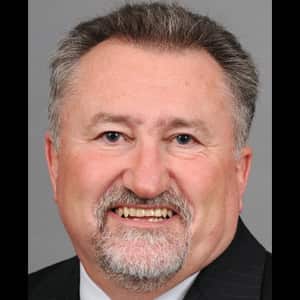 Wendell Barnhouse started writing about sports for his hometown newspaper when he was 18. From typewriters and copy paper to laptops and the Internet, after four-plus decades the essence of his job remains the same – telling great stories with words. 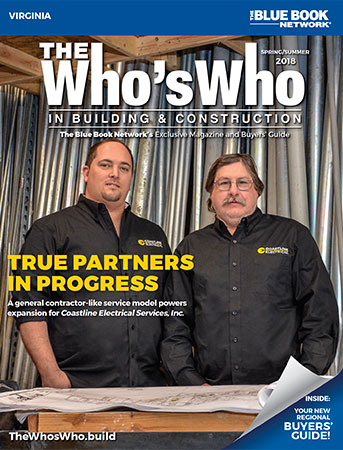