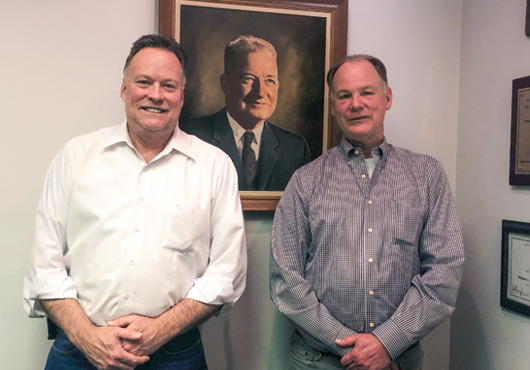 Cousins and Co-Owners Thomas Dunham Jr. (left) and Clifford Dunham Jr. stand in front of a picture of their grandfather, Willard Dunham, at their office in South Plainfield, New Jersey. 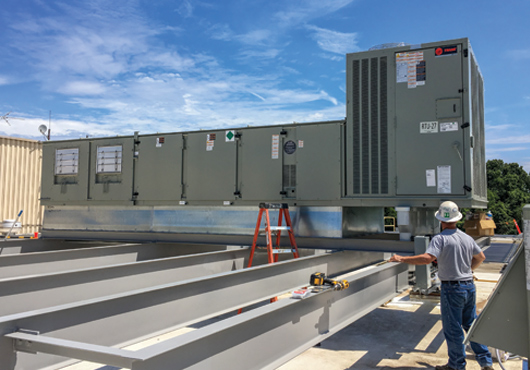 Many builders claim that building is in their blood—passed on through the generations—but cousins Thomas “Tom” Dunham Jr. and Clifford “Cliff” Dunham Jr. may have them all beat.

According to family history, their last name has been synonymous with the term “contractor” since the Mayflower made its historic voyage across the Atlantic to the New World.

That heritage allegedly began when Jonathan Dunham, a prominent early settler of Woodbridge Township, built the first grist mill there in 1670. Centuries later in 1937, he passed the proverbial genetic baton to Willard Dunham, who founded the Willard Dunham Construction Company in that same town in New Jersey.

Willard was a masonry contractor who made a name for himself by meeting tight schedule demands at war production plants in the 1940s. He then began constructing residential tracts and high-rise facilities during the housing boom of the postwar era.

With a clear business savvy and dedication to hard work, he later tackled commercial buildings, industrial projects, schools and churches, helping him develop a reputation for honesty and an ability to adapt with the times.

Willard worked well into his 90th year before passing his talents—and the company—down to his sons, who did the same with each of their own sons, Tom and Cliff, who now proudly manage the business. Today, Willard Dunham Construction Company serves a wide array of industries across Northern and Central New Jersey as a union contractor.

With a collective 100 years of expertise in industrial construction between them, Tom and Cliff continue the family legacy by taking on anything from small concrete foundations to multimillion-dollar construction management projects. Like the ancestors before them, they’re known for a willingness to tackle big challenges and innovate to solve customers’ needs.

“When you’re meant for something, you don’t really have to think about it,” Cliff says. “We have an old-fashioned mentality from our grandfather and our fathers, but they also instilled a resilience in us. Intuition and technology have really helped us move along. You’re never taught everything you need to know, so we had to figure it out as we went—and we did.”

An Inheritance of Hard Work

Tom and Cliff started developing that resilience at the age of 14 working summers at Willard Dunham Construction Company. The two claim they were often given the “nasty jobs”—painting, cleaning and working in nearby active steel mills and refineries.

“I think I threatened one time to go back to my paper route,” Tom jokes. “Because we were the owners’ kids, we often got the hard jobs, but it developed in us a strong work ethic.”

Despite pursuing courses in construction while in school, the two were unaware that they’d be making a career-long commitment to the company until they were well into their 20s. At that point, something clicked. Cliff was naturally drawn to work in the field, and Tom discovered he was meant for the office.

“I remember I was working as a truck driver at the time,” Tom reflects. “One day my father said, ‘Go get cleaned up, you’re going to a pre-bid meeting with me.’ He sat me down next to him and had me estimate this small concrete foundation, and that’s when I got started.”

Over the years, the two young men gradually became more involved at the company, becoming sole leaders in the 1990s when Cliff’s dad retired and Tom’s dad passed away. They continue to lead in their grandfather’s memory, and in honor of their fathers.

“We were sort of orphaned into the business,” Cliff says. “The bottom line is we were taught the results of hard work. That’s the way we were raised and we still apply those values today. You could say it was in our blood, but we also really worked at it.”

While Tom and Cliff admit they’re old-fashioned, that doesn’t mean they don’t innovate—it’s quite the opposite. One of their biggest strengths is their ability to continuously adapt with the times, much like the Dunhams who came before them.

When it comes to determining what projects they take on, Cliff says it comes down to intuition.

“We have a good feel for how things are flowing economy-wise and work-wise, and we understand the way the business model is moving,” he says. “It’s all about staying in touch.”

That intuition has led them to add new sectors of expertise along the way. For many years the company was heavy into refinery and pharmaceutical work when those industries were booming. They switched to more biopharmaceutical, communications, financial and utility work over time.

“We stick with our clients,” Tom says. “When they evolve, we’re there with them.”

A quick look at the list of projects on their website, and that’s clear. The range over the years is striking, with a project portfolio that includes everything from warehouses to office buildings, laboratories, banks, training centers and myriad renovated facilities.

One of their first “stretch” jobs was a groundwater remediation and sewer control project in the 1990s. The owner was facing fines from the New Jersey Department of Environmental Protection Compliance and Enforcement. According to Tom and Cliff, resolving their client’s issue required a cutting-edge design that involved constructing a series of drilled wells to reverse the groundwater onto the owner’s property.

Although they were just beginning their careers, they jumped at the opportunity to solve their client’s issue and broaden their skill sets.

“This job was highly scientific, and something I never imagined we’d take on,” Tom says. “We usually wouldn’t go after something like that, but they came to us and said, ‘We need your help and we think you’re the right people.’ And we did it successfully.”

Not only were they successful—that project earned them a Contractor of the Year award from the client in 1992.

“We don’t shy away from challenges,” Cliff says. “Whether we’re constructing a large corporate center or a simple renovation project, we put all our expertise into every job we undertake. Safety is No. 1 for us, and maintaining a select group of specialty subcontractors based on financial strength, safety and workmanship is also our top priority.”

According to the Dunhams, their success is less about the type of work they take on and more about their ability to maintain long-term relationships with their clients, subcontractors and union members.

“We’ve had hundreds of projects, but what’s really nice is when clients call you up to partner and bring you on,” Cliff says. “It’s about more than the money for us. We want to be their first phone call.”

That dedication is also evident in the tenure of their employees.

Tom and Cliff’s project managers, superintendents and foremen have an average of 25 years of experience in construction, and some have been with the company for 40 years. That’s something Tom and Cliff claim accounts for their continuously high standards for quality and the satisfaction of their clients.

One of those employees is Mimi Albaum, the Dunhams’ former Office Manager who recently retired after over 43 years of dedicated service. In that time, she did everything from taking care of accounts and payroll to making sure the late Willard Dunham took his medicine on time.

According to Mimi, Tom’s and Cliff’s fathers were like father figures to her, and Tom and Cliff were like brothers.

“I’ve watched them get married, have kids and have grandchildren,” she says. “My kids think our name is Dunham—just spelled differently!”

During her decades at the company, Mimi had a habit of collecting photos of life milestones of employees’ families and children and putting them on the walls of her office. When she recently took them down, it was like peeling back the layers of a lifetime.

“All the guys in the field want me to put them back up,” she says. “I think they’ll remember me.”

That longevity is not just found in the office—it’s in the field, too. The company has a carpenter foreman who joined right out of apprentice school, and he stayed there 40 years until he retired.

Tom and Cliff say it’s relationships like these on which they pride themselves.

“I think what attracts them is that we have strong family values, and we’ve watched their families grow,” Cliff says. “Just thinking about it, I’m actually getting emotional because we work hard at that. We’re there for them when they’re in need and they’re there for us when we’re in need. It goes both ways and we’ve all stuck with each other through thick and thin.”

That tight-knit family atmosphere no doubt starts with Tom and Cliff, who, despite being cousins, feel much closer.

When they reflect on their grandfather’s final days, they joke warmheartedly about his proclivity for cigars and the way he’d come into work to fall asleep in his chair—the ultimate testament to feeling at home and safe in the presence of the company and family he’d built.

“Through the years, our grandfather never neglected his business or his family, and was in the office every day well into his 90th year,” Tom says. “Our heritage and reputation are very dear to us, and we strive every day to build on our past endeavors, and better our future ones.”

“Building for the future,” he adds. “That’s our motto.” 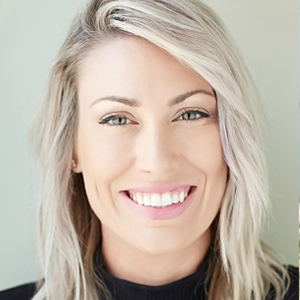 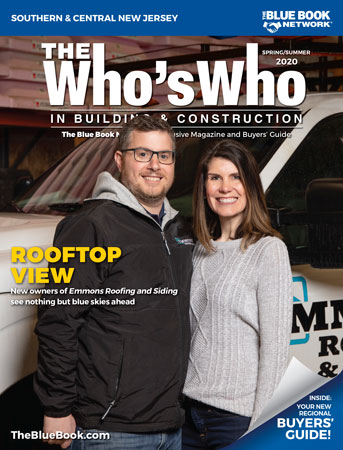