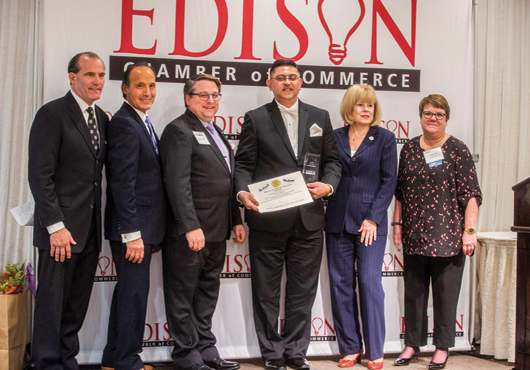 PK Architecture President Paritosh Kumar (center) received the Architect of the Year Award in 2018 from the Edison Chamber of Commerce, Edison, New Jersey. 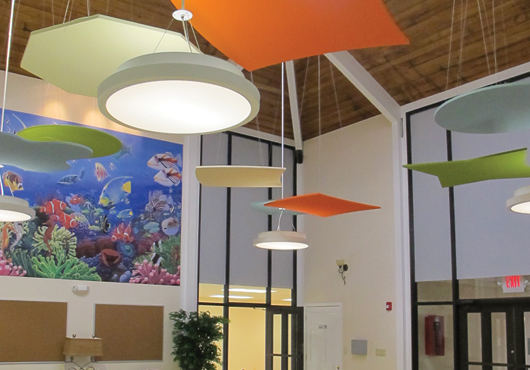 PK Architecture did all the interior design of this day care center in an existing vacant building for Children First Montessori School in North Brunswick, New Jersey. The main interior lobby is shown here.

PK Architecture has achieved its success through hard work, commitment to excellence and treating clients with care, according to the firm’s President Paritosh Kumar. “I go above and beyond. I make sure people’s aspirations are fulfilled. That is much more rewarding to me than financial gain.”

Based in Clark, New Jersey, the firm has been serving Central New Jersey since 2001. It has completed more than $100 million in projects and recently started a sister company, PK Design Build Construction, to become a one-stop shop for construction projects.

Kumar’s is an American success story, though he points out that his achievements did not come easily. He came to the U.S. as an immigrant in 1983 to study at the University of Oklahoma. He completed his bachelor’s and master’s degrees in architecture in 1988. After about 12 years of working for large reputable firms in New York and New Jersey, Kumar founded his own firm.

PK Architecture has built a good reputation for its work with building code officials and professionals in the region, Kumar says. “Code officials have recognized the detail of the firm’s drawings and the quality of construction services provided,” he adds. Clients commend his firm for going beyond what is required to make sure a project is done well. “I don’t get paid for all my services,” Kumar says. “But I think, if it were my house or my project, how would I want it done? I put myself in their position.”

An award-winning building designed by PK Architecture is the $1.5 million Shanghvi Plaza in Irvington, New Jersey. The 10,000-square-foot circular building “in the shape of a slice of pizza,” Kumar explains, was leased to Family Dollar and enhanced the town’s look as the first building seen from the freeway. For this design, Kumar was honored with the New Good Neighbor Award from the New Jersey Business & Industry Association and New Jersey Business magazine. He also received a joint resolution from the New Jersey State Senate and Assembly for his company’s integrity, vision, dedication and exemplary service to the state of New Jersey.

In addition, Kumar was named Architect of the Year in 2018 by the Edison, New Jersey, Chamber of Commerce. In 2019 he also received a mayor’s commendation resolution from Carteret, New Jersey, Mayor Dan Reiman for his significant contributions to the borough’s redevelopment. In 2017, Kumar was honored with an international award for excellence in design from First Friday Forum, a reputable literary organization in Chandigarh, India.

PK Architecture focuses on finding creative solutions, Kumar says. For example, in 2011, he worked on a veterans housing project in the borough of Carteret in Middlesex County, New Jersey. It started with a dilapidated building. “We converted it into state-of-the-art housing with solar panels on the roof to provide electric power and heat,” he explains. The development was named Lisicki Veterans Apartments in honor of Commander George Lisicki, the past U.S. Commander of the Veterans of Foreign Wars, a resident of Carteret, well known to Presidents Obama, George W. Bush and others. Commander Lisicki wrote an excellent testimonial for PK Architecture in appreciation of its exemplary work.

Renovations Give Towns a Lift

The firm is often hired to design renovations, such as the uplift of senior citizen housing facilities in Passaic, New Jersey, and façade renovations for various shopping malls. In Edison, Kumar designed a 3D sculpture logo installed as an integral part of the counter for the Crepes Celestes restaurant in Menlo Park Mall’s food court. “They want to copy it all over America,” Kumar says.

Renovations help revitalize a town’s environment, he adds. “When you make it modern and attractive, it brings in more people for shopping and creates a vibrant, enjoyable environment.”

Kumar specializes in medical office design and has done several projects over the years, including other large- and small-scale commercial projects.

Another large project was converting a rundown warehouse into the headquarters of Gulf American Line logistics company in Berkeley Heights, New Jersey. PK Architecture added a second floor for executive and administrative offices, while the first floor is used as warehouse space. A two-story lobby addition completed the project.

PK Architecture also takes pride in its high-end residential design. “Our residential designs have a sculptural quality and are not just boxes,” Kumar explains. “Every person has their own requirements. I want to give them a vision of exactly what their dream house is.” Among hundreds of houses he has done, the firm has finished one 6,000-square-foot custom home and has two 5,500-square-foot custom homes under construction in Scotch Plains, New Jersey, at this time.

When PK Architecture takes on a new project, Kumar begins by taking a look at the building site, analyzing the client’s needs, what the facility can accommodate and any challenges. Then he does a feasibility study, sharing ideas with the client. After this analysis, the next step is to get a wish list and goals for the project. Then he does a zoning analysis based on the property survey. “Then I give design solutions, based on the client’s and zoning ordinance requirements,” Kumar notes.

Going forward, PK Architecture plans to specialize in two niches: health care facilities and high-end residential projects. Kumar is the sole employee but has a team of engineers and drafting professionals he hires on an as-needed basis. He says he has been working with the same consultants for about 20 years and believes in long-term relationships, which is another way to reward good work.

When his design-build company constructs a project, Kumar brings in subconsultants and manages construction himself. “I keep a close eye on it so the project is built as intended and to applicable codes,” Kumar says. “This being my passion, I record every stage of construction with pictures and notes and coordinate with town, client and subcontractors to keep the project moving smoothly.”

PK Architecture has supported the community with unique projects. Kumar was approached by the Girls Scouts to educate a troop in Metuchen, New Jersey, about architecture and engineering. He assisted the girls in designing and developing a large sculptural model of the space shuttle. They built a metal frame and used Girl Scout cookie boxes as the skin. The structure was surrounded by asteroids, also covered in cookie boxes. It was displayed at Woodbridge Center shopping mall in Woodbridge, New Jersey, and then moved to other locations.

The firm also took part in a national competition sponsored by the American Institute of Architects, of which Kumar is a member. The competition, Canstruction, was developed by the Society for Design Administration, with contests held annually in more than 150 cities all over the world. “Companies donate cans of food to make giant sculptures,” Kumar explains. “Our project was a tribute to 9/11, with the twin tower structures, memorial to fallen heroes and the Statue of Liberty.” The firm received an award and donated the food cans to local soup kitchens and food banks.

PK Architecture also worked with the Carteret mayor’s office on a clothing drive for the needy. Kumar had an inventory left over from a discontinued side business. Instead of selling it, he donated to the drive.

Kumar was invited as chief guest to India to give talks to a literary organization and also to a university about “Architecture in America.” He also guided students on ways to pursue higher education and training in the U.S. for architecture.

Good relationships with clients, townships, consultants and subcontractors are critical to Kumar’s personal success. “Relationships are so much more important to me than financial gains,” he stresses. “I use holistic values of decent, hard work and high standards. I believe in reaching for the stars. Where there’s a will, there’s a way.” 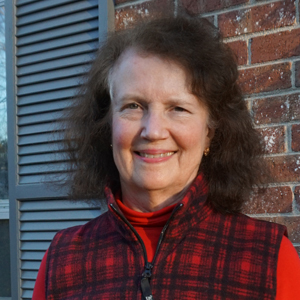 Freelance writer Licia Jackson, with 45 years in journalism, has served as associate publisher for the Columbia (SC) Regional Business Report and as special projects’ editor for SC Biz News.