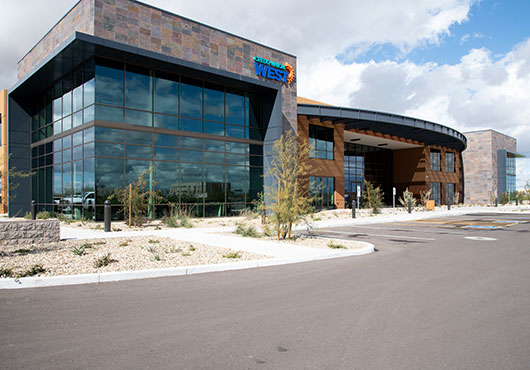 An exterior view of the Credit Union West headquarters in Glendale, AZ. In 2017, Decca partnered with project leaders to adjust the building’s design to accommodate the credit union’s budget and then built the complex. 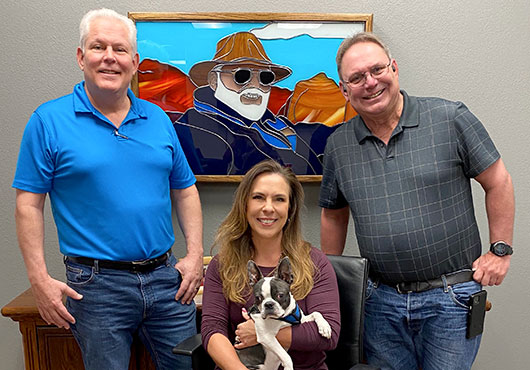 The leaders and co-owners of Decca Builders, Inc. in front of a stained-glass portrait of their father, Darryl Wareing, who founded the company in 1984 and passed away in 2005. Left to right: Michael Wareing, President; Kristen “Kris” Zeno, CFO (with her dog, Nugget); and John Wareing, Vice President.

In 1977, Darryl Wareing and his wife, Betsy, moved from Danville, California, to Scottsdale, Arizona, with their five children. With hindsight, it was this move that changed the trajectory of the Wareing family’s future and prompted the founding of a general contracting firm and family empire, Decca Builders, Inc. (Decca).

The Birth of Decca

Darryl moved his family to Arizona to work alongside his brother in the development and construction industries. However, in the early 1980s, Darryl’s brother devoted his efforts completely to development, while Darryl pursued his passion for construction. In 1984, Darryl opened Decca with Founding Partner Cindy DuChateau.

“To select a company name, my father drew a name out of a hat,” Darryl’s son and current President and Co-Owner of Decca, Michael Wareing, explains. “His only requirements were that the name be short, easy to remember and that it begin with a letter appearing early in the alphabet.” Michael adds laughing, “This was during a time when phone books were common.” According to Michael, the name “Decca” proved a contender because of his parents’ fond memories of their time living in Michigan, the home of one of two U.S. locations of recording company Decca Records.

Initially, with just six employees, the Decca team secured work primarily through competitive bidding and the priority was to win projects in the retail market—and win they did. The team traveled across Arizona and nearby states, including Texas, Nevada, New Mexico and California, building grocery stores and retail and industrial warehouses for large corporations such as Walmart and Cintas Corporation. In fact, Decca constructed the first-ever Walmart located in California, and within Decca’s first decade of business, the team built over 40 stores for the company.

By the early 1990s, Decca had grown to become one of the largest construction companies in Arizona.

In January 2005, Darryl passed away after a tragic battle with illness. When asked about his father’s original vision for the company, Michael says, “He always wanted his children to work with him and to make unique contributions to the business. He wanted something to leave his children. He wanted a family empire.”

Fortunately, before his untimely death, Darryl’s vision had become a reality, as he had the opportunity to work with all five of his children. Just prior to Decca’s founding, Darryl’s two oldest sons, John and Michael, were in college at Arizona State University (ASU) and worked with Darryl and his brother part time during the school year and full time during their holiday and summer vacations. John studied civil engineering at ASU and started work full time for Decca in 1984 as a Project Manager. Michael joined Decca full time as a Project Manager upon graduating in 1986 with a Bachelor of Science degree in purchasing (aka supply chain management). John and Michael have remained at Decca since then and, today, Michael serves as Decca’s President and Co-Owner, overseeing all management and financial functions; and John, the resident construction expert, is Vice President and Co-Owner of Decca and responsible for all project field operations.

From 1986 to 1993, Darryl’s third son, Scott Wareing, served as Decca’s Accounting Manager and Controller. Today, he remains closely tied to the construction industry, in his role as a Principal at Paffenbarger & Walden.

In 1990, Darryl’s youngest son, Andrew Wareing, joined Decca as an Assistant Project Superintendent before being promoted to General Field Superintendent in 1993. In 2002, Darryl’s daughter, Kristen “Kris” Zeno, a licensed certified public accountant, joined Decca as a Project Manager before transitioning to the role of Chief Financial Officer (CFO) upon Darryl’s passing, a role in which she manages the company’s accounting, finances and administrative functions. Prior to joining Decca, Kris worked for over eight years for homebuilder Del Webb. “When Del Webb was purchased by Pulte Homes in 2001, I had the opportunity to change jobs or work for Pulte,” Kris says. “My father’s health was declining, and he asked me to work for Decca while I determined my next career move. That was 19 years ago, and I’ve been with the company ever since.” Today, Kris remains Decca’s CFO and co-owns the company with Michael and John.

Following the early 1990s recession in the United States, Decca reevaluated its business model. At the time, a significant portion of the company’s work portfolio included California-based projects, a state in which the construction industry stagnated considerably during this period.

“Because of the cyclical nature of the construction industry’s booms and downturns, it was difficult as a contractor to maintain our workforce and cover our overhead,” Michael says. “Following the early 1990s recession, we were forced to make tough business decisions to position our company for long-term success.”

“Though we were confident in our business decisions, the hardest part was letting go of valued employees,” Michael explains. “As a family-run company, we consider our employees extended family members.”

In the End, the Client Wins

Michael notes the immense benefits and business implications of the Decca team’s strategic changes initiated in the 1990s. “I’ve signed all of Decca’s contracts since 1988. By the mid-1990s, the number of contracts that I signed equated to over a quarter of a billion dollars in company revenue. Yet, because we had so many projects spread across multiple states, I had seen in person so few,” Michael says. “Selectively committing to a smaller number of jobs ensured that our entire team could actively participate in each.”

According to Michael, especially within the last 20 years, Decca employees have prided themselves on being the “hand-holding guys.” He says, “We partner with our clients and help them devise the most effective and efficient paths to transform their project visions into realities within their preferred timeframes and budgets.”

Michael attributes Decca’s successful execution of this priority to the company’s design-build approach. “So many owners receive drawings from architects and then make a request for proposals from general contractors without an understanding of the cost to actually build what’s been designed,” he says. “By contrast, our approach connects all project partners, including architects and engineers, during the pre-construction phase. This controls costs, saves time and manages clients’ expectations to ensure that, in the end, the client wins.”

Often, Decca is approached to assist clients as they work to modify architects’ drawings retroactively to account for cost and timing considerations. For example, in 2017, Decca assisted leaders of a credit union in building a new headquarters in Glendale, Arizona. Decca was brought in after the company received a series of general contracting bids, all roughly $1.5 million over budget. “For six months, we partnered with project leaders to adjust the building’s design to accommodate the credit union’s budget and then built the complex. It was a very successful initiative,” Michael says.

By the early 2000s, Decca had changed significantly as a company. The Decca team had downsized from roughly 70 employees at the company’s peak to 13 and was running between three and six jobs at a time in Arizona, rather than the formerly customary 18 or 20 jobs across Arizona and neighboring states.

Since Decca’s founding in 1984, the team has prioritized cultivating lasting relationships with its clients. The team embraces the mantra of “The Decca Difference,” a philosophy that emphasizes integrity, delivering quality work products and contributing value. The benefit is evident in the fact that 90% of Decca’s business is attributed to repeat clients and referrals. For example, the company has built 46 stores for Walmart, completed 18 charter school projects with The Leona Group, partnered with The Englewood Group 16 times to build multifamily projects and built five industrial buildings for Cintas Corporation.

Further proof of the Decca team’s dedication to building lasting relationships is the company’s recent award of the role of general contractor for The GRID, a project in Arizona. One of Decca’s framing contractors referred Decca to the project owner in November 2020, and Decca was awarded the project in January 2021.

Developed in collaboration with the City of Mesa, Benedictine University Mesa and Palladium Enterprises, The GRID is a $75 million, public-private partnership venture designed to transform downtown Mesa. The project entails the conversion of an underutilized, city-owned parking structure on 3.3 acres into 14,000 square feet of coworking and office spaces, 196 “sky” apartments, 75 urban flats, 15 row homes, and first-floor retail and dining spaces.

Michael says this project is the first of its kind in Arizona and will require immense coordination among project team members. “The project’s complexity and idiosyncrasies are enticing…it involves so much more than four walls and a roof,” he adds. “For example, we are building on a small plot of land and on top of an existing parking garage currently used by visitors of a nearby municipal court building.”

Decca’s Marketing Coordinator and Director of Business Development Alexandra Hoover explains, “For many of us at Decca, this is a career project. From a business development perspective, a project of this size and magnitude is something you dream about.”

Despite the company’s range of successes, Michael and Kris are perhaps most proud of Decca’s people-centered culture. “Decca is like one big family,” Kris says. “The majority of our employees have worked for us for a long time, and we treat them like family.” 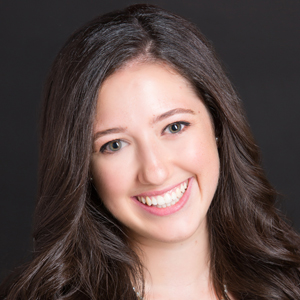