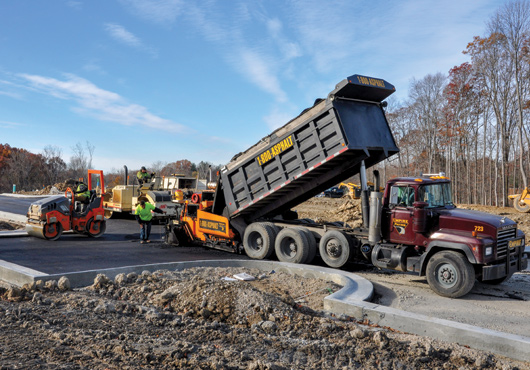 The company takes on a range of asphalt paving jobs, from parking lots to subdivisions. 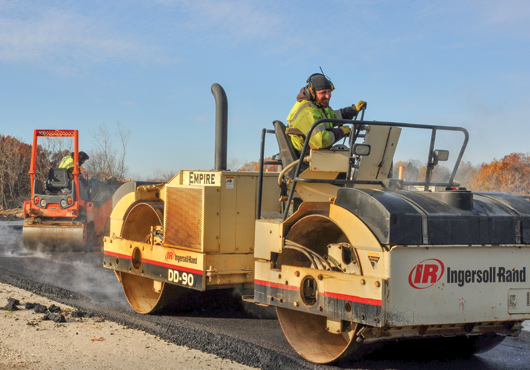 Empire Paving has grown from one truck to 40 and around 60 pieces of equipment.

Asphalt paving has long been a tough, dirty job built around heavy equipment, labor and large quantities of material. Yet, behind the pavers, rollers and the dozers, the world of asphalt is about people—at least that’s what the owners of Empire Paving believe.

Founded in 2004 by then 30-year-old Nick Sommer and 26-year-old Scott Heiman, Empire Paving is a locally owned and operated asphalt paving contractor serving Cleveland and the surrounding areas.

Now celebrating 15 years in business, Sommer and Heiman continue to push forward with a love for a job that few can equal. Here’s an inside look at asphalt paving from their perspective.

A Beer, a Belief and a Beginning

Sommer and Heiman met in 2002 while working for a small residential paving company in the Cleveland area. The two developed a strong respect and friendship for each other over the next two years. One evening, after completing a tough job and over a beer, the two started talking about their hopes and desires for the future.

Heiman recalls, “I always wanted to have a business of my own. My father was an entrepreneur with his own landscaping business and I thought Nick and I could build something similar in asphalt.”

Sommer agreed and the two made plans to start their own company. In early 2004, with a truck, some industry connections, no collateral, no suppliers and a lot of energy, they set out to build their own ‘empire’—in a rented space with no power or water.

While they were both skilled at asphalt paving, Sommer notes that they weren’t businessmen by conventional standards. He adds, “In the beginning, we went to the school of hard knocks and learned as we went along. We were blessed with some phenomenal advisers, people we trusted to help guide us in a positive direction and who helped minimize the chance of costly mistakes.”

The first year, Sommer and Heiman’s new company scraped by with around $50,000 in revenue. But the belief was there and they continued to reinvest as much as they could back into the business. To build revenue and reputation, the two teamed with another small paving company to take on driveways and patchwork jobs in the residential communities—with the vision to move toward larger commercial opportunities.

Sommer still recalls their first equipment purchase: “We drove an hour out of town to purchase an $800 pavement saw. We then hit the spring liquidation sale of a large equipment dealer and bought our first skid steer, roller and trailer.”

In 2005, they got a loan from a family member and bought their first paver, which allowed them to bid on and win jobs on their own. Soon after, they hired three people to help do the work and rented an office/warehouse (with lights and water, but no windows).

Heiman adds, “We knew a lot of folks in the industry, but mostly we just worked sun up to sun down bidding, selling and performing jobs. We talked to anyone who would listen.”

Their hard work and investments began to pay off. The two doubled their annual revenue every year over the next five years, building a strong customer base and establishing a line of credit. By 2010, Empire Paving was generating $3 million in annual sales. They bought a building for their equipment and office and by this point had 15 employees. Their list of clients continued to expand as they focused more on commercial and industrial asphalt paving.

Sommer notes that at that point, they recognized an expansion of services was necessary, adding, “Commercial property opportunities were more attainable with a ‘package’ plan.” Thus, Empire Paving branched into sealcoating, concrete repair and snow plowing. Of course, these trades required more labor and equipment—and their empire continued to grow.

Today, Empire Paving’s annual revenue is near $12 million. In 2018, the company leaders purchased a 15,000-square-foot building on 4.5 acres where they could store all of their equipment. Their fleet now includes over 40 trucks and 60 pieces of equipment.

Empire’s current client list has become a who’s who in the commercial, health care and industrial sectors, ranging from car dealerships to big box stores. One of Empire Paving’s newest customers is the Cleveland Clinic, an organization that has 10 regional hospitals and 19 family health centers in northeast Ohio. Sommer and Heiman take tremendous satisfaction in the fact that some of their clients have been with them since day one.

In a given year, Empire Paving will do upward of 400 jobs in an eight-to-nine-month season. The team, which now numbers 45, is what gives the owners the most gratification.

“That kind of workload would not be possible without teamwork and trust,” Sommer says. “I’m proud and honored to work with our Empire family. Scott and I have been really fortunate to pull together a group of people as special as ours. We work shoulder-to-shoulder every day and believe it’s our job to take care of them first.”

Key in that respect is providing a safe work environment, opportunities for growth and benefits like health insurance and a retirement package—a bonus that few companies this size are able to do. Heiman adds, “We respect their skills and recognize that we wouldn’t be where we are without them. We pay union wages even though we’re not union. Our goal is to maintain an environment that encourages high performance and rewards accordingly.”

According to industry veteran Warren Edwards, the company leaders’ means and methods stand out. Edwards explains, “I was born and raised in the asphalt paving business and can say unequivocally that Nick and Scott are pretty unconventional. They never stop looking for ways to improve, have an unbeatable work ethic, pour time and money back into the company and, rare in our world, are always thinking of their employees.”

Edwards, once a supervisor over Sommer and Heiman when they first started laying asphalt many years ago, joined Empire Paving in 2012. He says he’s still amazed at their people-focused business ethic, adding, “Asphalt paving is a hard job. But they make it easier for every individual to do a quality job and grow with the company. They’ve created a family-like environment, where we’re all pulling each other along on both good days and bad.”

In fact, both Heiman and Sommer are often on the job sites helping out, operating equipment and resolving issues. Sommer adds, “We all work together on a daily basis and make collaborative decisions to obtain the best results. Everyone’s opinion matters, from the foremen to the operators to the laborers—we’re a team. We encourage our people to express their opinions and ideas and emphasize two minds are better than one.”

He and his business partner believe that caring for their team requires them to continually create new opportunities—so they never quit looking ahead.

“We’ve been really fortunate to pull together a group of people as special as ours.” Nick Sommer, Co-Owner, Empire Paving

This year, Empire Paving is opening a new division of the business focused on recycling and crushing. Heiman explains, “One of the biggest challenges for us or any asphalt company is getting rid of spoils. If we’re near an asphalt plant, we can drop it off for recycling, but it costs money.”

A few years ago, the two leaders heard about an available piece of city property owned by the City of Cleveland Land Bank. The piece of contaminated property held the remnants of one of Cleveland’s old asphalt plants. They put together a proposal to buy the land, remediate it and start their own asphalt recycling facility. The city accepted the plan.

The new site will be open by summer 2019, recycling materials that will be used by Empire Paving and other contractors.

Looking back, Heiman freely admits that what they’ve built is not what he imagined all those years ago while enjoying a beer with his friend. He adds, “We worked hard, love our job and have a great team—all the elements of a successful business.”

Sommer agrees, adding, “We have strived to keep our word with our employees and our customers. In doing so, our foundation has become strong.”

That said, the two believe they’re far from done, as they continually seek new ways to expand services, build bonds and grow their customer base…because everyone knows that ‘empire’ builders are persistent in their quest to meet ever higher asphalt expectations. 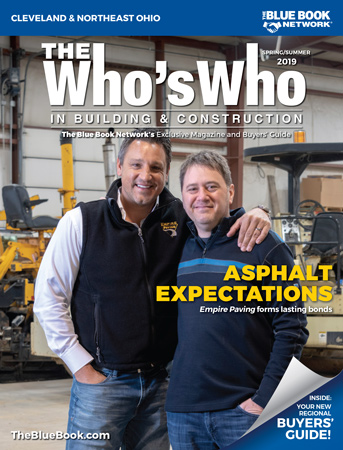