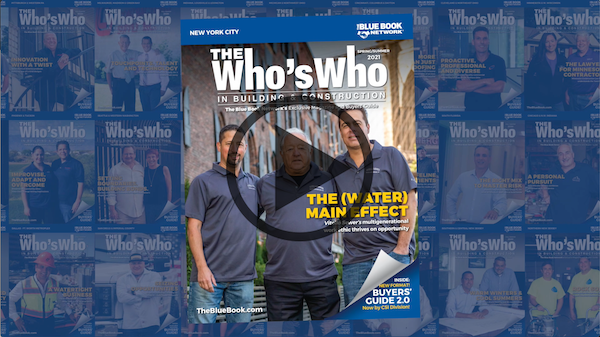 From installing new or repairing aging systems to emergency response calls, Vitello Sewer, Water Main, Heating & Plumbing Services, Inc. (Vitello Sewer) has made a name for itself as a go-to company for infrastructure support.

For Founder Thomas A. Vitello, the Bronx-based business is a powerful demonstration of the value of hard work. He says, “I started working for my uncle’s plumbing business when I was 14 years old. By the time I was in my 20s, I started my own company doing plumbing and heating, largely for residential customers. When a colleague asked me to help out with sewer and water mains, I agreed, because I figured more work is better.”

Thomas would eventually buy out his colleague and then hire his son, Tom M. Vitello. The latter grew up learning about plumbing as well as the sewer and water main construction business from his father. He joined his father’s company full time in 1994, when he was just 20 years old, with an eye on pushing boundaries.

With the same work ethic as his father, Tom sought growth. He explains, “We were a small company at that time, with just five employees—but I believed we had great potential to expand and increase business.” He got his New York City master plumber license in 2001 at the age of 26, and by 2002, took over 51 percent of company ownership.

The individual perspectives of father and son coincided well. Thomas says, “Once Tommy joined the company, things really took off. He wanted to take on more commercial work. Through a lot of hard work, he brought the company to a whole different level, taking on bigger projects in the water and sewer space and expanding our service area, and building our name particularly in emergency response services. I just backed him up and it’s working out.”

Today, Vitello Sewer has grown from a handful of people in 1991 to 25, including a few more family members. In 2005, Sean Rossi, Tom’s brother-in-law, joined the company. Sean says, “I’d worked in construction for years and owned a trucking company, but needed a change. Vitello was a good fit for my skills.” Sean initially worked as a laborer, driver and operator. He became a partner in Vitello Sewer in 2014.

Much of Vitello Sewer’s growth, both in personnel and in the scope and scale of projects over the last decade, has been through repeat customers and word-of-mouth. Its clients include public-sector property owners, state and local agencies, contractors, plumbers, property managers and real estate brokers.

“He’s an essential part of our office as is Alicia Baker, our Office Manager, in charge of scheduling, among other tasks,” Tom says. “In fact, the majority of our business comes from our reputation for efficiency, cost effectiveness and getting the job done right.”

Part of that care is making sure crews have the best equipment. About 90 percent of the company’s fleet is brand-new—including excavators, backhoes and attachments such as hammers and plate compactors—and is equipped with vehicle tracking software.

Sewer and water main construction or repair requires very specialized equipment as well as knowledge of the necessary endorsements, certificates and insurance requirements. Tom adds, “It’s a tough industry to be in. After all these years, we’ve gotten to know the industry do’s and don’ts.”

Vitello Sewer’s job was to construct 10-inch water main piping throughout the entire park as well as multiple fire hydrants. Tom recalls, “Working under this magnificent bridge was a unique experience. Over the course of six years, we rebuilt the entire park water system to support water features, restrooms and water fountains.”

Another challenging job took place at 2219 Givan Avenue, the site of a two-acre affordable housing project in the Bronx that included a new 11-story senior living apartment building. As a subcontractor to Flatiron Construction Corp., Vitello Sewer’s job was to add new catch basins, manholes, hydrants, sewers and water mains to support the building. In total, crews removed approximately 5,000 yards of rock to support the necessary utilities, which included connecting to an existing sewer system located 17 feet beneath the surface.

Tom says, “We did all the digging and sitework for this job. And installed an 8-inch reduced pressure zone (RPZ) backflow prevention assembly and meter in an outside hot box—our first time performing this type of work, and it went very well.”

“New York City contractors know us and our crews. Most of our work is from referrals—and every one of them calls us personally.” Tom M. Vitello, President, Vitello Sewer

In Times of Need

Vitello Sewer has a strong reputation in the construction community for emergency response.

Tom says, “New York City contractors know us and our crews. Most of our work is from referrals—and every one of them calls us personally. For example, when a subcontractor for Consolidated Edison Company of New York, Inc. (Con Edison) calls about a sewer/water main break, they know we will take care of everything—pull permits, set up the crew and fix the problem.” This comprehensive response from Vitello reduces the extra cost that the subcontractor will have incurred.

Sean adds, “We pull over 200 permits a year. The most challenging aspect of our job is dealing with the elements, both in the air and underground. Fixing a broken water main, for instance, when it’s 5 degrees is rough as is trying to split rock to dig a new trench. But this is what our guys are trained to do, and they do it well.”

Many jobs, like the recent 680 Fifth Avenue water main break, come in through referrals from previous Vitello Sewer contractor and plumbing partners. In this case, a 6-inch water main broke and flooded the iconic building and the street.

“I got this call from a repeat customer at 9 p.m. on a Saturday night,” recalls Sean. “We had a crew deployed within three hours and within 48 hours, the main was repaired, inspected and water was back online for the building.”

Two of the newest members include Tom’s youngest brother, Dylan Vitello, and his nephew Louis Rossi, 22 and 20, respectively. He says, “I feel like we’re doing something right if we’re able to attract young people to the industry. Because so much of our skills are learned through on-the-job training, we want to retain our employees, so we take care of them. We treat them like family.”

Beyond the right tools and training, the crews build rapport by getting together outside of work. Tom and Sean regularly plan activities that range from barbecues and holiday parties to paintball and fishing trips.

Currently, sewer and water main construction work comprise about 90 percent of Vitello Sewer’s business, with the other 10 percent focused on interior plumbing services, but that balance is likely going to shift in the near future. Tom says, “We’re expanding our interior plumbing services and we’re certified for gas testing now as well. We think the young guys especially will gain valuable insight and expanded opportunities in that area.”

When asked what he appreciates most about the work that Vitello Sewer performs, Sean points to the personal notes from customers. “I look forward to hearing the praise. If they take the time to write a note expressing their appreciation, I know we’re doing a good job,” he says.

Tom and Sean say their goals for the next five years are to expand geographically to the surrounding areas and grow the interior plumbing construction services, which will allow them to hire more mechanics and helpers, thus creating more jobs within the community.

For Founder of the company, Thomas, their vision and the work ethic of his sons, son-in-law and every member of the Vitello Sewer team are a source of great pride. He adds, “I always worked. I realized early on that nobody is going to give it to me, so I have to work. I taught that to my children—and I’m proud of them and all they’ve done to build the reputation of Vitello Sewer.”

Tom concludes, “Vitello has maintained a strong reputation for knowledge, experience and quality. I’m proud that we are the go-to company for water and sewer main projects.”