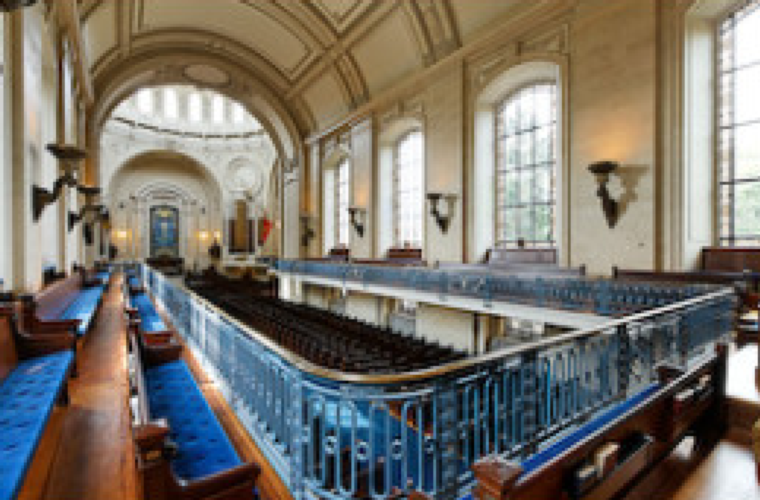 This project included the phased historic renovation of the main chapel at the United States Naval Academy. The Rotunda was constructed in 1908; the Nave was later added in 1938. Historic renovations are being performed in two phases to allow either the nave or rotunda to remain operational at all times for Sunday services, weddings, funerals, and other special events. The intent of the renovations were to return the historic structure back to the Architects original intent including repairs of the water-damaged plaster walls and ornamental plaster by sculptors, three-step glazing to apply faux finish by artisans to replicate limestone, refinishing of over 200 original pews and pew plaques, replacement of the kneeler pads, and replacement of pew cushions. Additional work included painting of metal hand rails including gold leafing of the medallions, gold leafing behind the statue of Christ, refinishing of the original wood flooring, refinishing of the marble base, replacement of carpeting, refinishing of all original wood doors and replacement and/or repair of original hardware. It was determined that the existing wood flooring in the Rotunda was too damaged for refinishing and was removed and replaced with Antique Heart Pine reclaimed from a building of the same era as the original flooring. Prior to commencement of the work, extreme care was taken to protect the multi-million dollar pipe organs, sconces, status, and various historical emblems. A 55 temporary wall was erected to separate the Nave from the Rotunda. Over 9,000 sq ft of scaffolding and staircase was erected in the Nave to allow plasterers and artisans access to the arched ceilings and walls. Phase II renovations were performed using a combination of lifts and scaffolding. A temporary altar was erected in the Nave upon completion of Phase I to allow use of the chapel without disruption during Phase II renovations. Despite the work stoppages for funerals and weddings and numerous additions to the original scope of work this project was completed ahead of schedule.