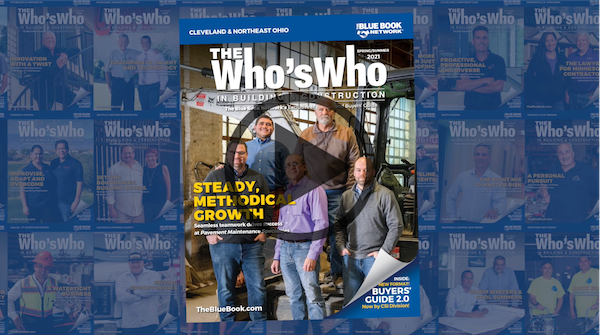 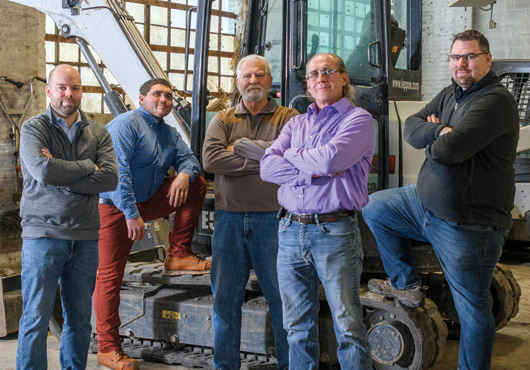 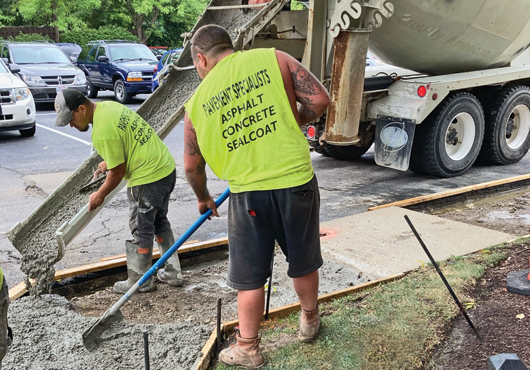 When it comes to tackling monster projects, Pavement Maintenance Specialties knows there’s nothing that defeats a good team. “Our employees work seamlessly together. We’re family here, and it carries out onto the job site. Clients tell us over and over again what a great group of guys we have working for us,” says Senior Sales Associate Rob Boehm.

This teamwork was on display recently when the Cleveland-based contractor was charged with providing concrete, paving and sealcoating services for a large apartment complex. In addition to installing concrete sidewalks and aprons, the company was asked to pave and sealcoat a parking lot that spanned 580,000 square feet. “This was a monster project that took us out of our comfort zone. I’m a very positive person, but even I was a little nervous. This was the biggest job we’d taken on to date,” says Chris Walden, President of the full-service asphalt and concrete company.

Poring over site images and conducting multiple walkthroughs on site, the team at Pavement Maintenance Specialties mapped out a plan that would minimize traffic flow disruptions and complete the work in an efficient and timely fashion. Each day, the company briefed onsite maintenance staff and building management on upcoming work. “Our challenge was to coordinate and carry out the work on this large project without inconveniencing tenants,” Walden says. “The close coordination between Rob and his customer was so impressive.”

With four crews, the company conducted 15 mobilizations to complete work in a few short weeks. When an equipment failure threatened the project on Day Two, Walden worked all night to replace the asphalt paver in time for the start of business the next day. “We didn’t miss a beat,” Walden says. “Our employees executed this project flawlessly.”

No Project Too Big or Too Small

This type of Herculean team effort isn’t new for the asphalt and concrete contractor. “Our philosophy is to build a team so strong you can’t tell who the leader is,” Walden says. The team’s strength in the industry has long been recognized by residential, commercial and industrial customers across northeastern Ohio. “No job is too large or too small for us,” Boehm says. “We work with management companies and are often subcontracted out by other paving and concrete companies.”

While large projects might span a half a million square feet in size, other projects can be as small as a homeowner’s driveway. “Residential services represent a growth opportunity for us,” Walden says. “We were hearing about other contractors who weren’t doing estimates or returning calls from homeowners because they considered the jobs to be too small. I brought in a young man to run our residential sales division so we could focus on this important service area.”

The sales department has grown to a team of three employees, not including Walden, who loves doing sales when he has time for it. “We’re all working toward the same goal, but internally, we like a healthy bit of competition,” Walden notes. “Rob went all-out and earned the sales crown in 2020, but this year, I’m determined to take it back.”

With 29 team members, Pavement Maintenance Specialties’ four crews work from the beginning of April until early December on projects across the state. “We typically take on jobs that are within a 100-mile radius of Cleveland. If there’s asphalt, concrete or sealcoating involved, we’re there,” Walden says.

Pavement Maintenance Specialties offers clients a diverse array of services, including asphalt paving, repair and resurfacing, sealcoating, crack sealing, line striping, concrete work, new construction and drainage solutions. “We do it all in-house, too,” Boehm notes. “Clients don’t have to call three contractors to get the job done. We’re a one-stop shop.”

Walden joined the company in 2013 and assumed ownership in 2017. Under his leadership, Pavement Maintenance Specialties has achieved steady growth of between 20% and 30% each year. He believes that the team’s success comes from a laser-like focus on building partnerships that last long after a project is complete. “When we bid on one apartment complex, we have our eye on the other 30 complexes the customer might own. We’re not trying to maximize our profit on one job. Our goal is to provide a fair price and work that is so good that we become the contractor of choice for all the customer’s properties,” Walden says.

The company has some pretty devoted clients, too. “Instead of pricing out every project, there are some customers who will just tell us to go do the work and bill them. I mean, how often does that happen?” Walden asks. “But that speaks to the trust that we’ve earned with customers. We don’t cheat or cut corners, and we always do quality work.”

“Our philosophy is to build a team so strong you can’t tell who the leader is.” Chris Walden, President, Pavement Maintenance Specialties

Helping Each Other Out

Walden got his start in the paving business more than 20 years ago, learning it from the ground up. “I started as a laborer, then became a foreman.” Eventually, Walden got into sales, helping to grow other companies before joining Pavement Maintenance Specialties.

What he loves first and foremost about the industry are the people. “This industry is like its own family. We might bid and compete against each other, but if something happens—like a piece of equipment breaks down—we help each other out.”

Walden also believes he has the best employees in the business. “We have employees here who have been with me, following me from other companies, since the 1990s and early 2000s,” he says. “Our employees have a nine-month window to earn enough money for the entire year. They know I treat them well and that with me they’ll always have work.”

Walden not only always has work for employees, but he’s also always there for them—even late into the night.

“I don’t go home until all my ‘kids’ are in the house. If there’s someone driving a dump truck with a trailer on the highway, I want to be available right away in case they need me. We’re all here for each other, and I don’t go home until the last guy or gal leaves the yard.”

Walden takes care in hiring team members who have a similar way of working and a respect for his slow and methodical approach to company growth. “In 2017, I had the opportunity to observe Rob at a job site. He was with another company at the time and was doing a walkthrough of a housing project in Cleveland. I just stepped back and watched how he interacted with the customer, listening to every word he said. After that, I tracked him down and brought him in for an interview, which went on for hours. I made him an offer the next day.”

Knocking Projects Out of the Park

Walden likens a successful project to a symphony—all parts harmonizing to create a successful outcome. He gives the example of a pool deck project for a large apartment complex in Mayfield Heights. “There were so many elements that had to come together at just the right time,” he says.

With the pool tucked away in a courtyard of the eight-story building, accessibility was an issue. “We couldn’t get our trucks in there during the excavation work,” Boehm says. “We had to coordinate the work of our equipment operators and truck drivers with staff and management to minimize our impact on tenants.”

“If you’re not respectful of the client and their tenants, you may never work for them again,” adds Walden. “When we pave a parking lot of an apartment building, we don’t expect tenants to have moved their cars by 7 a.m. when our crew gets there. We know there will be some delay and we work around it. It’s part of what sets us apart.”

With the aid of a giant concrete pump and boom that overhung the building, the company completed the project and “knocked it out of the park,” according to Walden.

“The entire project took just five days. Chris has a philosophy that we get in and get out with the least amount of disruption to our clients. And that’s what we did,” Boehm says.

Another project had Pavement Maintenance Specialties constructing concrete stairs for an apartment complex in University Heights. “This was the biggest stair project we’d ever undertaken,” Walden explains. At 60 feet in length, the stairs had to be constructed at a steep 24-foot elevation. “We had to remove and rebuild a retaining wall to accommodate the stairs’ elevation and install drain tile behind the wall. We completed that project in five days.”

When a well-known national insurance company, headquartered in Mayfield Heights, needed help with its aging parking lot, Pavement Maintenance Specialties was the contractor of choice. The company filled cracks, sealed and restriped the 963,000-square-foot surface. With 10 crew members, the company operated three spray units simultaneously to apply two coats of the sealcoat product, completing the project in just three days. “We were there at 4:30 a.m. every morning to get the job done as soon as possible,” Boehm says.

“We’ve done work at 15 of this customer’s properties,” Walden adds. “We’ve sealed almost 1.3 million square feet in total and applied over 17,000 gallons of coal tar pavement sealer, 24,250 pounds of crack sealer and more than 153,000 linear feet of line-striping paint on these properties.”

A Soft Spot for Those in Need

While most projects support the bottom line, Walden has a soft spot for churches and homeowners who get taken advantage of by fly-by-night contractors. “A little old lady, who didn’t have two nickels to rub together, had her down payment stolen by one of these operations. I paved her driveway for nothing,” he says.

Walden has worked hard to create a working environment where employees can succeed. “When I get up each day at 4:20 a.m., combing my hair and counting my greys, I say to myself, ‘Only I can ruin my day.’ I try to keep it real with these guys. When you have 518 jobs in one year, you’re bound to have a few mistakes. My guys know I don’t yell or scream. If something goes wrong, I want them to feel comfortable telling me so we can fix the issue quickly.”

With his son, Anthony, learning the business, Walden is working hard to pass on his knowledge to the next generation. “Anthony has a similar drive and work ethic as I do. He does whatever is needed, and it’s amazing to see his growth each year. He gets to watch what I do and see how I act and react each day. I’m hoping one day he’ll carry on this work for me.” 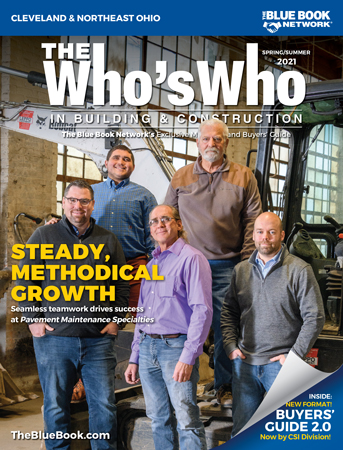